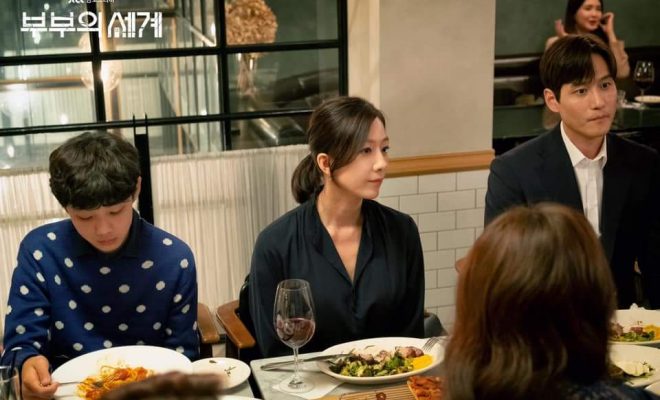 jTBC drama The World Of The Married has been generating a lot of buzz.

According to the report announced by CJ ENM on April 7, The World Of The Married topped the Content Power Index for the period ranging from March 30 to April 5. The drama amassed a total of 332.2 points ranking first among all entertainment programs that includes both dramas and non-dramas. It took the top spot for two weeks in a row.

Based on the BBC series Doctor Foster, The World Of The Married narrates the story of a loving couple with a perfect life. However, everything comes crashing down after the couple is faced with a whirlpool of betrayals.

Immediately after its premiere on March 27, the drama went to break multiple records. It achieved the best premiere episode viewership rating among all jTBC dramas. In addition to that, the ratings for the later episodes too have been on the continuous rise. The drama has touch the mark of 15% ratings in its fourth episode itself.

Following the The World Of The Married, tvN’s Thursday Special Hospital Playlist is ranked second with 264.4 points. Meanwhile, taking the third and fourth places are MBC shows Radio Star with 230.7 points and I Live Alone with 227.5 points. SBS’ Running Man is ranked fifth with 226.3 points.

The Content Power Index is a model jointly  developed by CJ ENM and Nielsen Korea which measures the content impact of television programs across various channels on the basis of consumer behaviour.