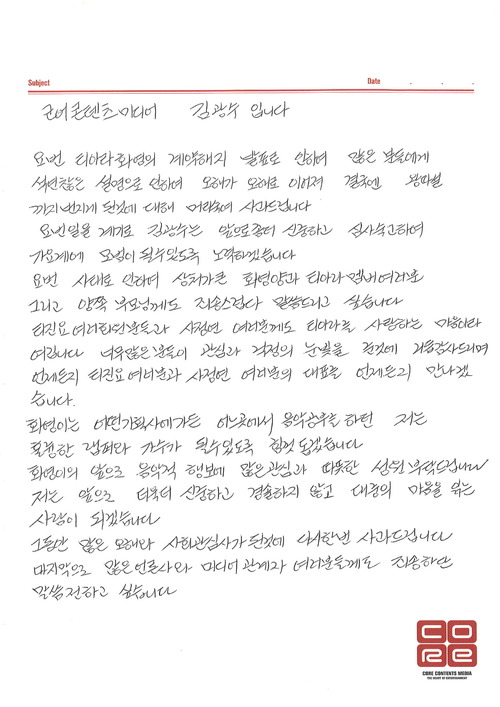 Core Contents Media’s CEO, Kim Kwang Soo, released a handwritten apology note addressed to the affected parties, including the members of the press and media outlets after the T-ara and Hwayoung‘s incident.

This is Core Contents Media’s Kim Kwang Soo. I bow my head and formally apologize for the misunderstandings that stemmed from the termination of T-ara’s Hwa Young’s contract and for my doubtful explanation which led to even rumors about outcasts. I would like to express my apology to Hwa Young and the T-ara members, and both side’s parents for the hurt they received from this incident.

Kim Kwang Soo recognized every fan that loved T-ara and mentioned that he will be open to meet up with Sajunyeon and the representatives of T-Jinyo, which is a group that formed to protest the dismissal of Hwayoung from T-ara.

He went on to note Hwa Young’s current situation and requested for fans’ continued support of her career development.

Wherever Hwa Young goes to continue her study of music. I will support her in becoming an amazing rapper and singer. I ask for your continued support in Hwa Young and her musical future.

He concluded the letter with flashbacks of the incident.

I will strive to become a careful and thoughtful individual before the public. I apologize once more for the misunderstandings and for being a social concern. Lastly, I would also like to apologize to the media outlets and representatives.

What are your opinions on this letter?