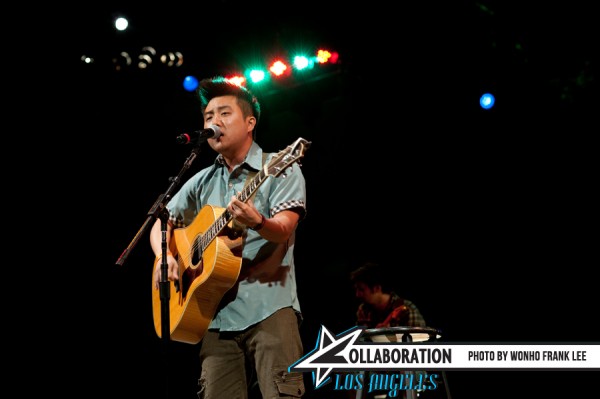 On Friday, July 13, 2012, Kollaboration Los Angeles drew a packed stadium of supporters of the Asian American talent community to the Ford Amphitheatre in Hollywood, CA. The enthusiastic audience was engaged in cheers and laughter at the musical and comedic acts all throughout the show, demonstrating the continuing success of Kollaboration’s mission, “Empowerment through Entertainment.

The doors of the Ford opened at 6:30 PM for picnicking in the Ford’s Edison Plaza, and for many attendees on Friday, the food may very well have been the highlight of the event. Tacos and other concessions were made available on-site, but many guests showed up with pizza boxes, fried rice, sandwiches, and even party-sized platters of catered entrées – a feast in true Asian potluck style, complete with abundant bottles of wine and beer.  Fans were able to purchase official Kollaboration apparel and artist merchandise from the competitors themselves, and David Choi’s album was noted to be in especially high demand during the night. Sponsor Verizon Wireless also had their newest phones and devices on display, right next to Picturesque Photobooth’s setup, where guests could don fake boas and large sunglasses and take home an amusing photo to remember the night.

The show opened with the celebrated return of Kollaboration’s original founder and host for the night, Paul PK Kim, whose witty banter welcomed the audience to the show and introduced the competitions’s four multi-talented judges: Dante Basco, established actor whose roles include “Rufio” in Steven Spielberg’s Hook as well as the voice of “Prince Zuko” in Nickelodeon’s phenomenal animated hit “Avatar: The Last Airbender;” Jen From Head to Toe, make-up guru whose charming video tutorials have captured the hearts of nearly 300,000 YouTube subscribers; JaeYoon Choi,  MNET’s executive producer of popular televisions shows such as the prestigious Mnet Asian Music Awards and 2NE1TV; and Traci Kato-Kiriyama, creator of the widely-known grassroots performance organization Tuesday Night Project in Downtown LA.

The competition officially began with PK’s playful introduction of the first contestant, R&B singer Brooke Taylor, requesting that she use her soulful pipes to tell his wife that he wants to “get lucky tonight.” She then went on to deliver a soulful performance of her original song entitled “Dear Archer.” Her jazzy chords on the grand piano, coupled with her emotionally powerful and smooth vocals set the perfect mood to start off the night. In a similar vein to Brooke’s introduction, PK had the next contestant, Ms. Laney, use her opera chops to tell his son to “eat your vegetables.” Ms. Laney’s performance consisted of a creative medley of various Top-40 rap songs, including Trey Songz’ “Say Aah” and Nicki Minaj’s “Superbass,” re-imagined in R&B ballad form. Next was another cover performance by Nate Tao.  Accompanied by a beat-boxer and a classically trained pianist, Tao sang a mash-up of pop songs, ranging from “If I Ain’t Got You” and “Call Me Maybe.  The fourth contestant to go was high school student Kaitlin Obien, who looked completely at ease on stage.  Swaying to her ukele, Obien charmed the audience with her original song and sweet vocals. Her performance drew loud cheers from the audience as her fans waved posters and glow sticks in support. Dave & The Cousins completed the first half of the show before intermission with a song that showcased the harmonic synthesis of their voices and reflected their playful personalities.

During the intermission, audience members were quickly auditioned backstage for Kollaboration’s popular Freestyle Vocal Competition and Dance Competition. Four were selected for each to compete on stage with the winner to be selected by audience applause.  The vocal competition began shortly after the break and ended in a tie with the final two sharing the $100 prize. Jeremy Crooks and his band then ignited the stage with their energetic sounds, upbeat style, and Crooks’ smooth solo dance moves. Fittingly, the Freestyle Dance Competition followed with the winner taking home a $100 cash prize as well. St. Andrew was the last of the seven competitors to go on but was nothing short of spectacular. With theatrical make-up under the eyes that complemented his namesake, he concluded the competition with a beautiful original number.  While the judges’ votes were calculated and audience members casted their own by text messaging for their favorite competitor, guest comedian Jimmy Ouyang performed a hilarious stand-up routine, thoroughly entertaining the crowd. Finally, it was time for the special guest performer that everyone had been waiting for – David Choi. He performed two songs, “Missing Piece” and “Underneath Your Love,” off his latest album, Forever and Ever. Choi then brought onto the stage his father, Ray Choi, a renowned musician in his own right as a world-champion autoharpist, to perform together for the first time ever. The night concluded with the presentation of the Verizon Wireless Audience Choice Award winner, Ms. Laney, and the Kollaboration LA 2012 winner, Nate Tao. Tao will have an opportunity to be voted into the Kollaboration grand finale show in November 2012 and represent Los Angeles. 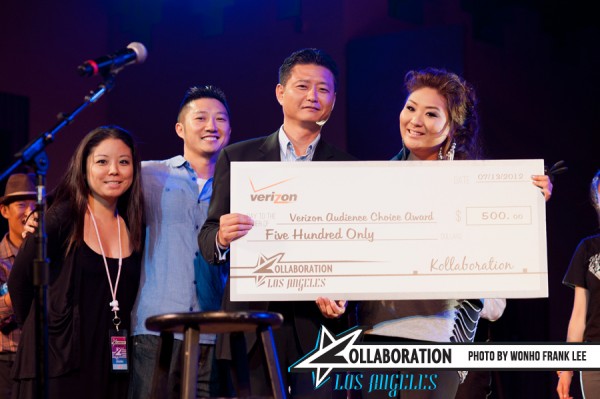 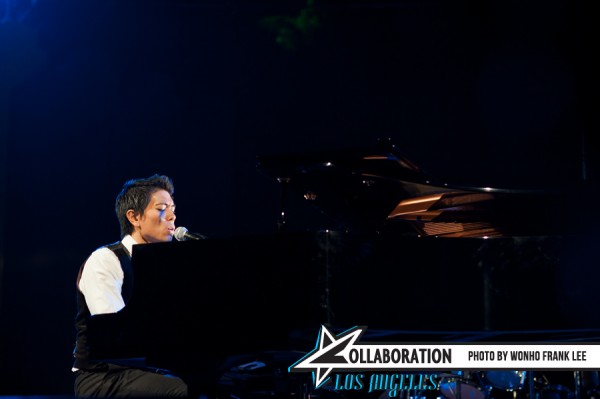 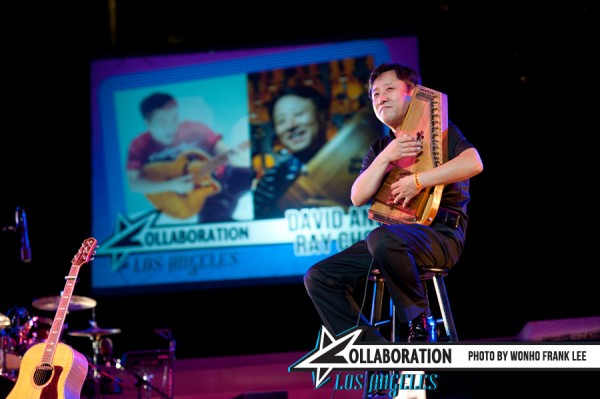 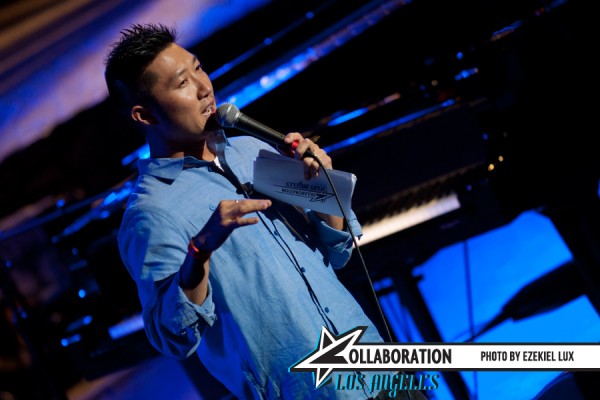 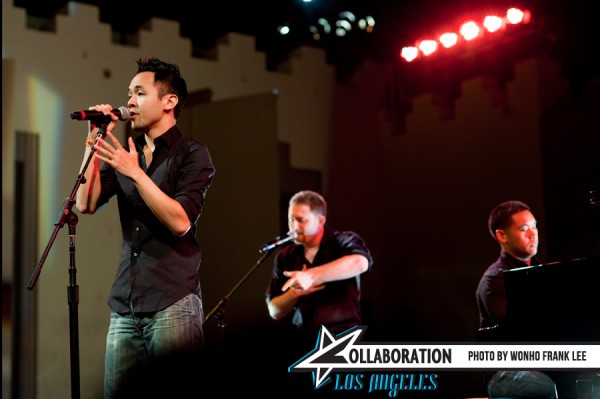 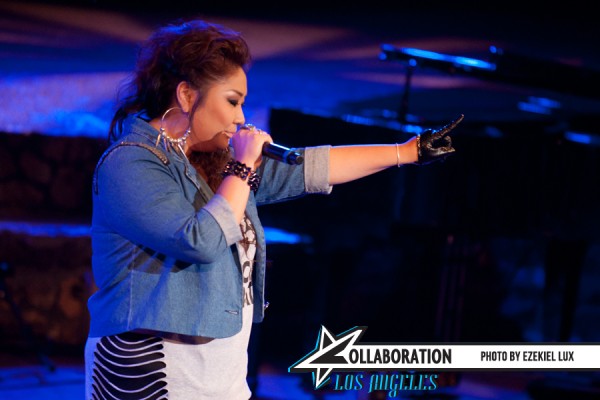 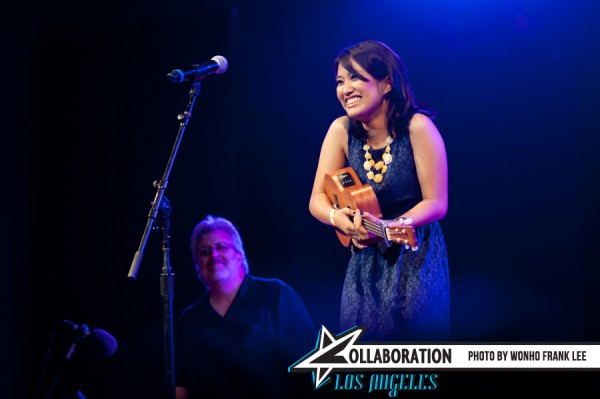 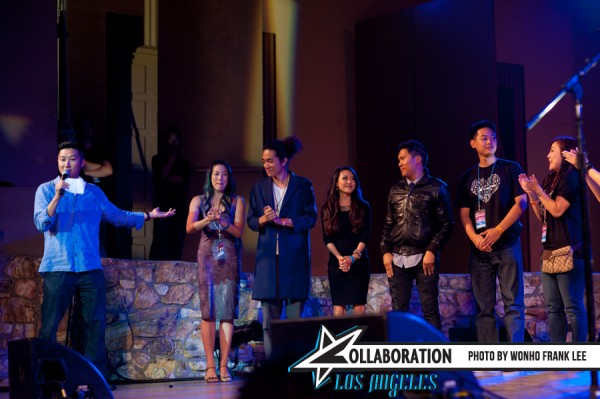 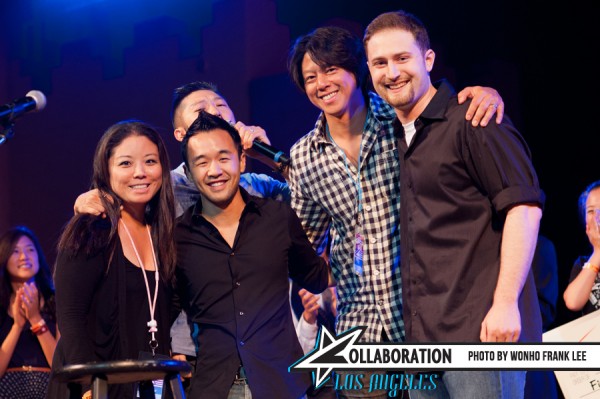