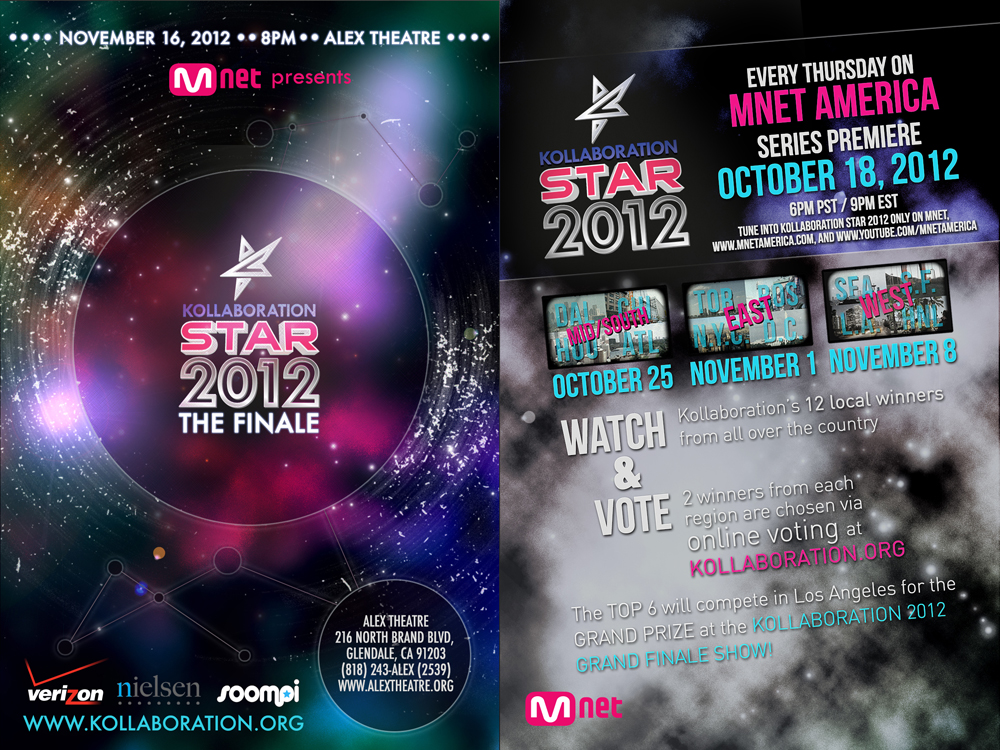 Kollaboration is proud to announce that its newly added show, “Kollaboration Star 2012 – The Finale” will be taking place on Friday, November 16, 2012 at the beautiful Alex Theatre in Glendale, CA.

As the capstone to their annual talent competition series, this grand finale show gives this year’s winners from Kollaboration’s 14 cities an even bigger opportunity to showcase their talents.  From the 14 Kollaboration winners across the nation, 6 finalists will be selected by a public online poll and 1 finalist will be chosen by Mnet to represent their cities in an ultimate showdown to declare themselves the best of the best.  The grand prize winner will win $2000 and a trip to Hong Kong, China to attend the acclaimed Mnet Asian Music Awards (MAMA).

Celebrating 12 years of fulfilling its mission of “Empowerment through Entertainment,” Kollaboration has partnered with Mnet to produce a spectacular event that will truly highlight the incredible growth and development of not only the Kollaboration movement, but also the Asian Pacific Islander American/Canadian (APIA/C) presence in the entertainment industry as a whole.  To give the competitors maximum exposure, the Finale Show will also be broadcasted live through www.MnetAmerica.com and aired later in the year as part of the Mnet-produced reality television series: “Kollaboration Star 2012.”  Catch Kollaboration’s television debut during its series premiere on Thursday, October 18, 2012 on Mnet.

2012 will truly be a spectacular year for Asian American artists as Kollaboration and Mnet continue to provide creative platforms in order to encourage and empower APIA/Cs to pursue their passions in mainstream media, where diversity is still relatively limited and in development.

For more information regarding “Kollaboration Star 2012 – The Finale,” please visit www.kollaboration.org or connect on Facebook at www.facebook.com/Kollaboration

Kollaboration is an Asian Pacific Islander American/Canadian (APIA/C) 501(c)(3) non-profit organization dedicated to promoting positive and accurate perceptions of APIA/Cs by not only providing a platform for young artists to showcase their talents, but also supporting the APIA/C community as a whole. Founded in 2000 by Paul PK Kim, the Kollaboration movement began with a single show in Los Angeles and has since then expanded to 13 other cities in North America: Chicago, New York, Toronto, Atlanta, Tulsa, Houston, San Francisco, Seattle, Washington D.C, East Lansing, Boston, Dallas, and Honolulu.  In 2012, we will proudly host a total of 15 shows in our 14 cities, all united under Kollaboration’s mission statement and mantra “Empowerment through Entertainment.”

Mnet (www.mnetamerica.com) is a youth entertainment brand for all things Asian cool. It uses video, digital, experiential and social media to reach Millennials with lifestyle content inspired by Asian pop culture and entertainment. This includes the first and leading 24/7 English-language television network in the U.S. targeting fans of K-pop music, anime and other genres of entertainment growing in popularity throughout Asia and around the world. An advertiser-supported network –distributed in over 30 DMAs through Comcast Cable, Time Warner cable, FIOS TV, Cox cable, Charter Communications and via TV Everywhere – Mnet is the first U.S. television property of CJ Entertainment & Media Group, Asia’s leading vertically-integrated entertainment company and a unit of CJ Corporation. Mnet is headquartered in Los Angeles, can be found on http://www.facebook.com/MnetUSA and on Twitter @MnetLA

We need your support! If you have enjoyed our work, consider to support us with a one-time or recurring donation from as low as $5 to keep our site going! Donate securely below via Stripe, Paypal, Apple Pay or Google Wallet.
FacebookTwitter
SubscribeGoogleWhatsappPinterestDiggRedditStumbleuponVkWeiboPocketTumblrMailMeneameOdnoklassniki
Related ItemsHallyuKollaborationKpopmnet
← Previous Story ABC News talks about K-pop
Next Story → Hyundai PYL releases teaser for “MAXSTEP”