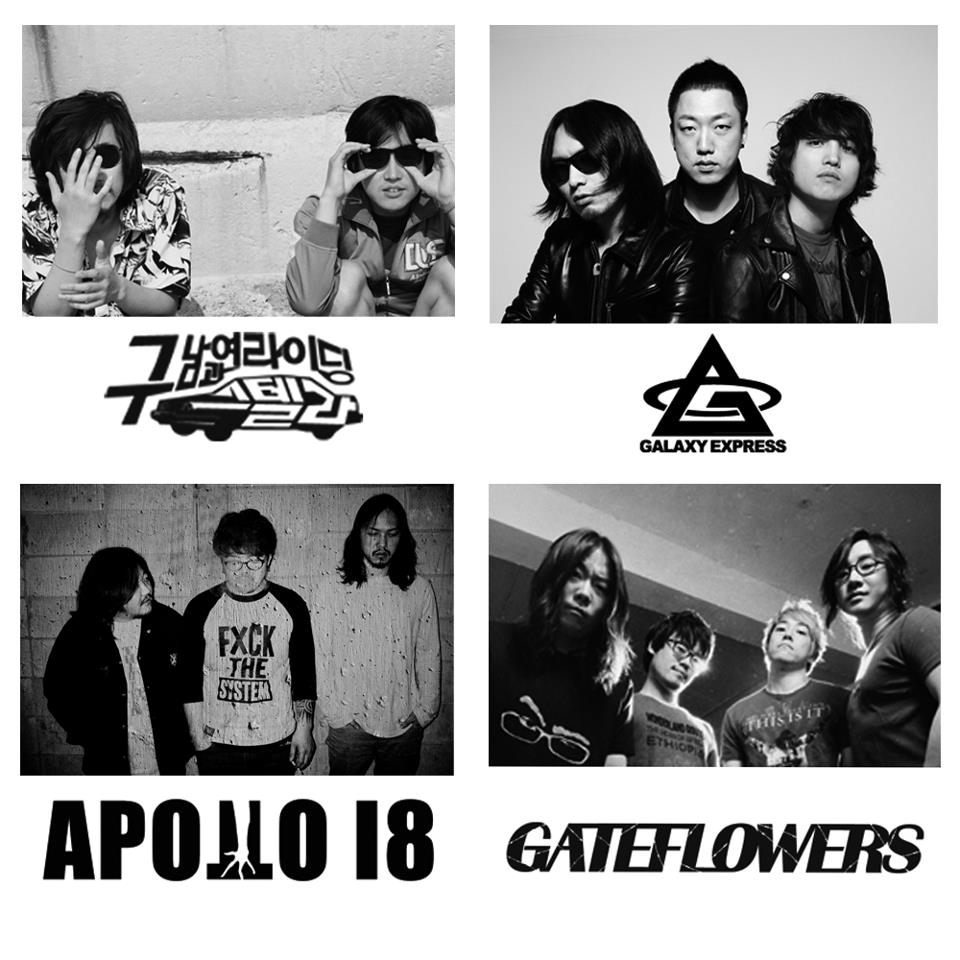 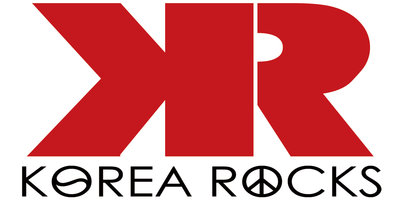 Korea Rocks is set to invade the UK with tour, and an all-exclusive interview with Park JongHyun of Galaxy Express, Kim DaeInn of Apollo 18, and Yeom SeungShik of Gate Flowers, to open up about the upcoming tour.

Presented by Hyundai Card Music, Korea Rocks has announced that it will be holding a tour in the United Kingdom in late April.

While Korean rock music doesn’t quite have the international following as Kpop has amassed over the years, the genre has become popular with Kpop fans worldwide. The tour will headline some of Korea’s most influential and well-loved rock bands and will hit seven venues from April 24 to May 4.

Our good friends Galaxy Express and Apollo 18 will be joined by highly impressive rock bands, Goonamguayeoridingstella (Goonam) and Gate Flowers, and are poised to bring one of the most explosive and high octane K-rock performances ever seen in the UK. The groups will not only be performing at two of the UK’s highly popular music festivals, Focus Wales and Liverpool Sound City, but will also perform three free club shows during the tour.

Check out the tour schedule below: 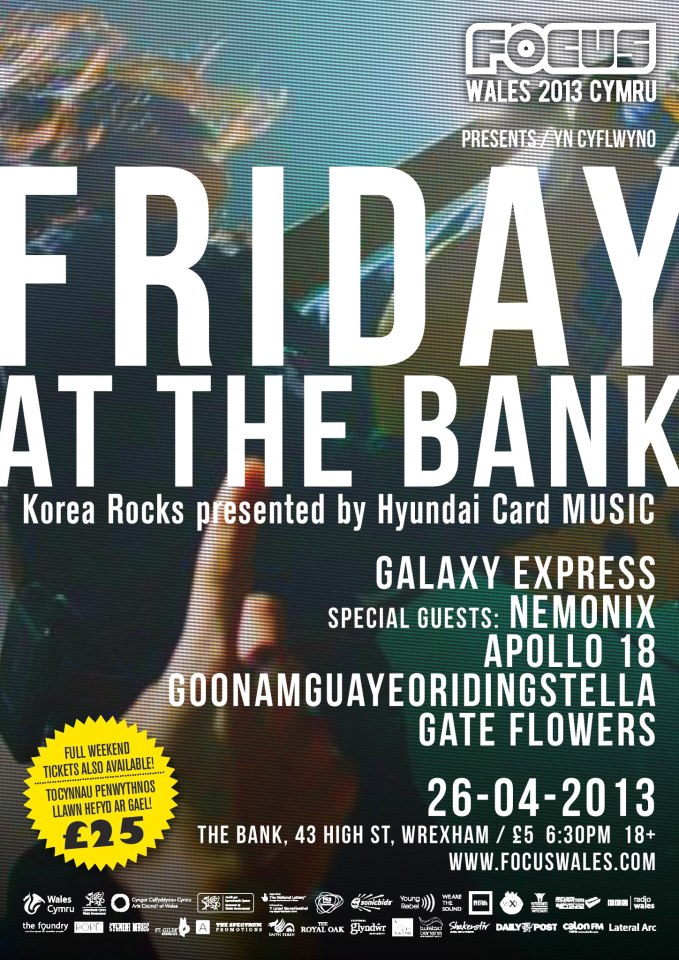 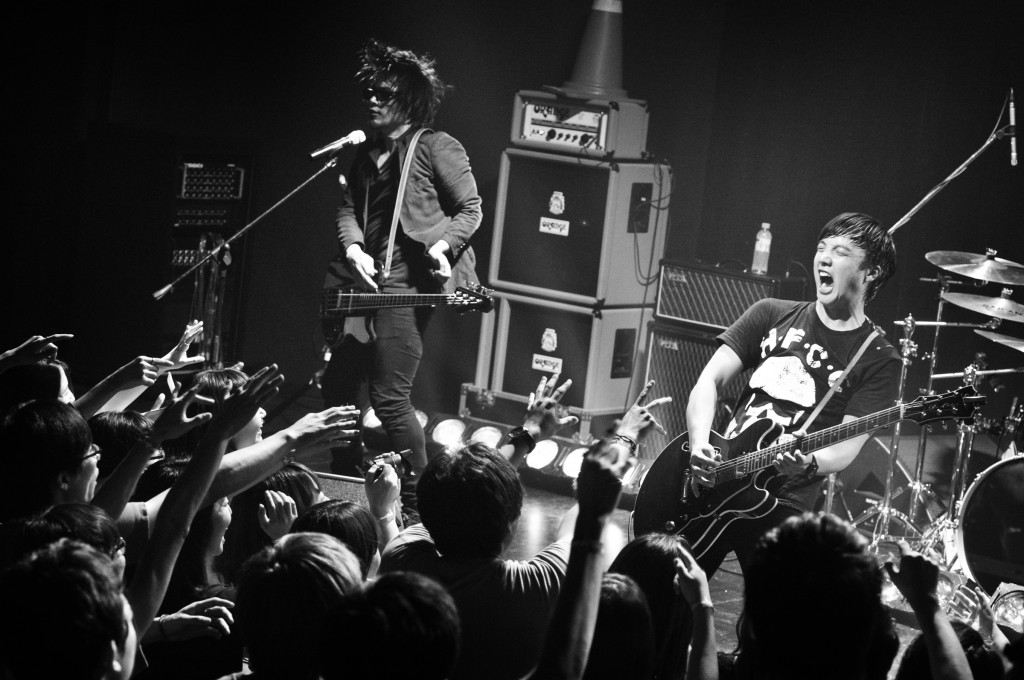 Award winning South Korean rockers Galaxy Express was formed in Seoul in 2006. Members Park JongHyun (main vocals/guitar), Lee JuHyun (bassist/vocal) and Kim HeeKwon (drummer) bring to the stage with an infectious blend of high octane garage rock and punk, that wows the crowd with every note. Galaxy Express has released seven albums in total, one being a co-album with K-Indie superstars Crying Nut, and have garnered accolades such as winning the Best Rock Album in 2009 at the Korean Music Awards.

The group just concluded their third highly successful tour in the US, once again performing at major music festivals such as SXSW and The Valley of the Vapors Independent Music Festival. Galaxy Express recently released their new self titled album in late last November and is receiving high praise from fans all around the world. With their infection rhythm and explosive stage performance, Galaxy Express truly epitomizes their title of Kings of Korean Indie. 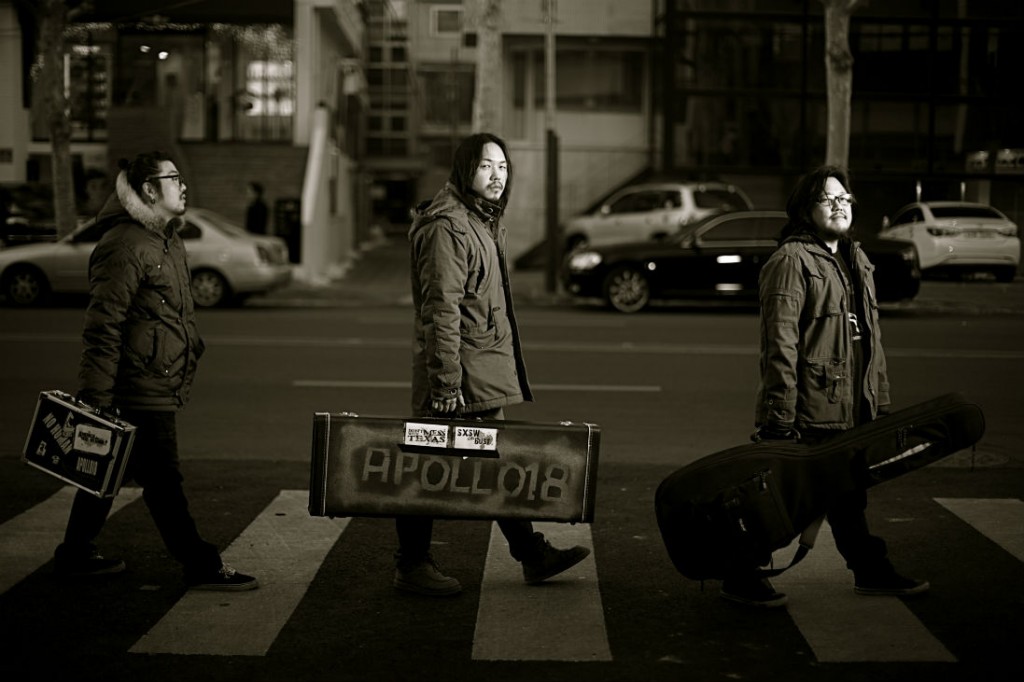 Formed in 2008, Apollo 18 blends a mix of post hardcore rock with screaming guitars and driving downbeats that just leaves the fans in awe. Members Choi HyunSeok (guitar/vocals), Kim DaeInn (base/vocal) and Lee SangYun (drummer) bring to the stage a performance like no other with a high adrenaline energy that is sure to suck you into the euphoric bliss of some of the best Korean rock on the planet.

Since their formation, Apollo 18 has released five albums, won awards such as Rookie of the Year at the Korean Music Awards, and have regularly graced the stages of some of the world most well-know music festivals such as the Jisan Valley Rock Festival, Incheon Pentaport Rock Festival, SXSW, Valley of the Vapors along with performances at Japan’s famed Fuji Rock Festival and Taiwan’s Beastie Rock Festival. Apollo 18 has been praised by numerous outlets during their career for producing some of the most exciting and intense rock stage performances in the world and are considered the rock band to watch if you’re looking for an amazing performance both vocally and musically. 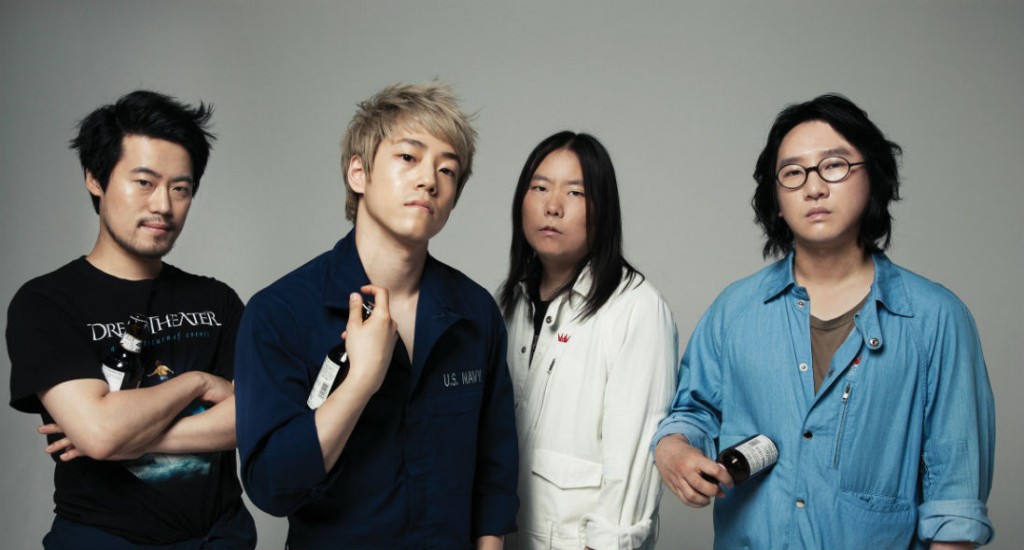 With a eclectic mix of alternative and hard rock in their repertoire, Korean rockers Gate Flowers, are definitely one of the best Korean rock bands in the market to date with their Pearl Jam-esque sound. Lead singer, Park KeunHong, vocals draw you in with a melding of both a soulful groove and hard-rocker screams that are so impressive, you just can’t help but be enthralled.

Yeom SeungShik (guitarist), Ryu Jaein (bassist) and Yang Chongeun (drums), produce some of the most head-banging-ly addictive arrangements in the business to date. Gate Flowers’ ballads are definitely not something to overlook either, songs like  Between the Leaves and Night Night (which was nominated for Best Rock Song in 2013), shows off the bands soulful and softer sides while still sticking to their alternative roots. Their talents have not gone unnoticed.

In 2010 Gate Flowers pulled in not only the government sponsored Hello Rookie prize for being the most promising new band in 2010, but also landed both Rookie of the Year and Best Rock Song at the Korean Music Awards in 2011. Gate Flowers’ participation in the 2013 Korea Rocks tour, will be the first time which the band will tour internationally and are sure to impress even the most wayward fan. 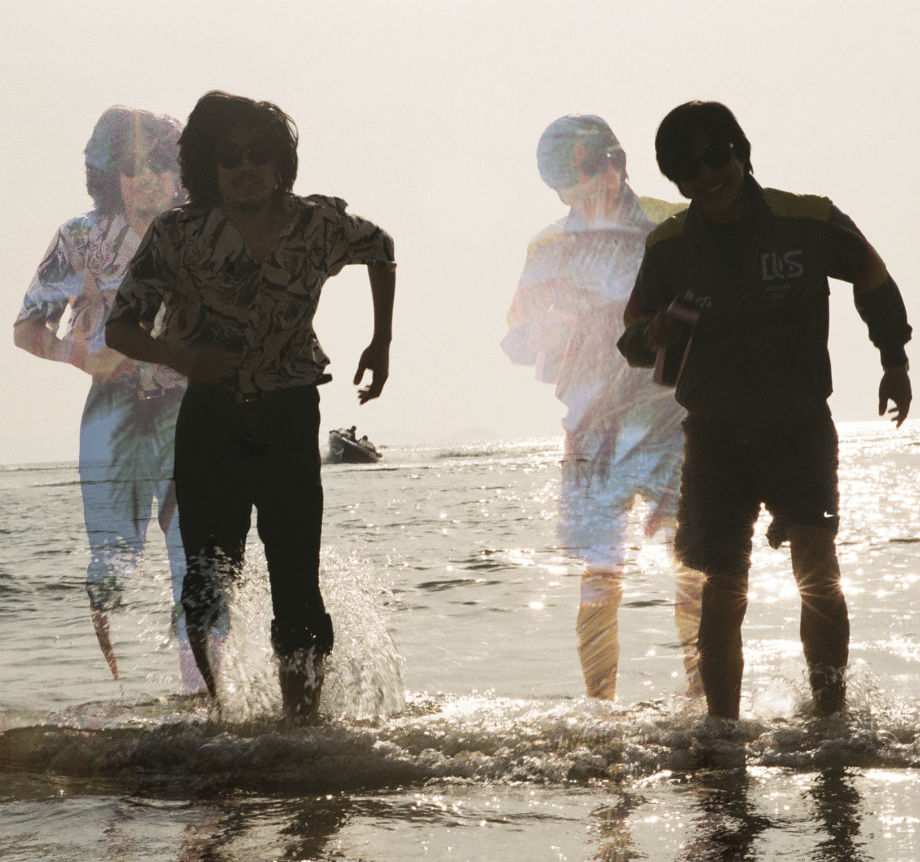 Known for their hard-to-nail down style, Goonamguayeoridingstella (Goonam) utilizes and combines a multitude of musical genres, to produce some of the most entertaining and unique songs in their field.

With influences of rock, blues, reggae, psychedelic  and even dub-step all at their creative fingertips, Goonam members have solidify themselves as one of the hottest rock acts in today’s market. Goonam’s We Are Pure (2007) album placed on 100beat.com‘s Best Korean Albums of the 2000’s at number seventy and their Woojung-Motel album (2011) was nominated for Best Modern Rock album at the 2012 Korean Music Awards. Goonam has also hit the international stages at events like Japan’s Summer Sonic Festival, SXSW, and Canadian Music Week in Toronto.

Goonamguayeoridingstella is comprised of  Joh Ung(guitarist/vocalist) and Eem ByungHak (basists) as the groups main members, with Park TaeSik  (drummer) and  Kim Naun (keyboardist) filling out the group for their live performances.

On the eve of their UK tour, we at hellokpop are really fortunate to be able to sit down with Park Jonghyun of Galaxy Express, Kim Daeinn of Apollo 18, and Yeom Seungshik of Gate Flowers, to discuss about their upcoming tour, what they hope to show the fans, how they feel about touring with each other, and what fans should expect.

*Goonam was unavailable due to a scheduling conflict.

With your upcoming tour in the UK just on the horizon, how do you feel about having the opportunity to perform there?

Park Jonghyun: “It’s going to be cool.  We just finished up a month-long US tour and only have two weeks off before the start of the UK tour.  I think Galaxy Express sound great right now after doing 26 shows in the States.  So hopefully that will carry over to the UK concerts, too!  This is our first time performing in the UK, so we’re excited to check everything out.”

Kim Daeinn: “Being able to share our songs with music lovers in different countries is always an awesome feeling.  We’ve had so many great experiences during our past tours in Japan, the United States, Canada, and Taiwan.  We can’t wait to head out on the road again and explore the UK and its music scene.”

Yeom Seungshik: “We’re really happy about it!  This will be our first international tour, so we’re really excited to show people what we can do.  We admire how bands from the UK have helped shape the spirit and sound of rock ‘n’ roll, so it’s an honor to be able to play there.”

What should the fans expect at the concert?

Park Jonghyun: “They should expect a great night of Korean indie music.  There are a lot of really good bands playing in Korea’s indie scene right now.  This is just a small sample of some of the talent in the scene.  Hopefully we can all inspire people to check out more Korean music after watching Korea Rocks.”

Kim Daeinn: “You can expect our shows to be loud.  We’re so happy to meet everyone at the shows, but we want to try and burst their eardrums!”

Yeom Seungshik: “They should expect to not stand still!  We hope people enjoy and move around to the rock ‘n’ grooves we’ll be turning out for them.”

For those out there who are not familiar with your music styles, how would you describe it (in 3 words or less)?

What are you looking forward to the most with this new tour?

Park Jonghyun: “Meeting new people and seeing new things are always are the best things to do on tour.  I hope to drink some good beer and eat fish and chips, too.”

Kim Daeinn: “Getting to drink lots of good beer!  The beer in Korea is not very good.  But British beer is very tasty.  I’m hoping we’ll have time to visit Stonehenge too.  I’ve wanted to visit there for a long time, so it would be really cool to finally see it in person.”

Yeom Seungshik: “We are looking forward to meeting new audiences and having a lot of fun together with them.”

How does it feel to be touring with the other groups in the lineup?

Park Jonghyun: “It’s going to be like a big fun road trip with lots of our friends.  We’re fans of all the bands on this tour and are happy to be able to gig abroad with them.  We’ve been hoping to tour with Apollo 18 for a while now, so we’re excited to finally travel somewhere new with them.  We always have a lot of fun with those guys.  I’m a bit of a troublemaker sometimes and Apollo 18 can be too.  Hopefully that will lead to some good tour stories that we can share later on!”

Kim Daeinn: “I think it’s going to be a lot of fun.  We’re really good friends with Galaxy Express and have gigged with them a bunch of times in Seoul.  Our musical styles are different, but I think we have a really strong impact when we’re paired together.  We played at Jeju Island’s Stepping Stone festival in 2011 with Goonamguayeoridingstella and they were cool to hang out with.  We don’t know Gate Flowers well yet, but we’re looking forward to experiencing some new things together with them in the UK.”

Yeom Seungshik: “It feels awesome!  We are going to tour with some of the greatest bands in Korea right now. We’re very excited to hang out and travel with all of them.”

Park Junghyun: “Come get wild and have fun at our UK concerts with us.  We’re traveling a long way to perform.  Let’s all work together to make these gigs amazing nights!”

Yeom Seungshik: “We’ve waited a long time to be able to share our music with overseas listeners.  We plan to make the most of this opportunity and can’t wait to play for you.” 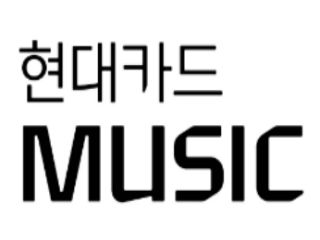 For more information about Galaxy Express, Apollo 18, Goonam, and Gate Flowers, check out the videos and links below:

We at hellokpop would like to give a special shoutout to Galaxy Express, Apollo 18, Goonam, and Gate Flowers, to thank them for their sharing with us, and we wish them all the best with their UK tour.

Will you be attending the Korea Rocks tour? Which artist are looking forward to see the most?

Let us know in the comments below!