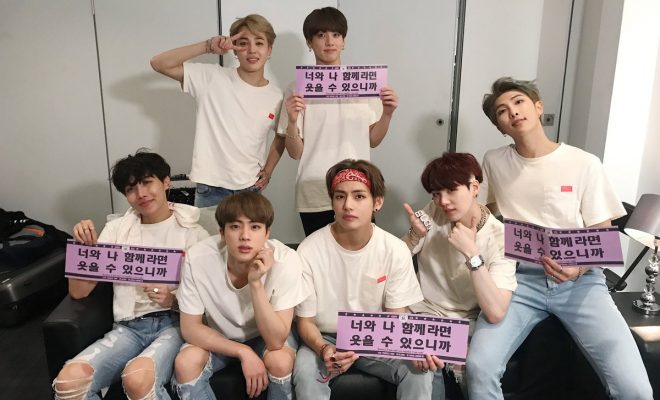 On Nov 15, the day has finally come when thousands of senior Korean high school students take the exam that will determine their future.

Suneung, also known as the College Scholastic Ability Test, is a very important part of a Korean student’s life. They gruel 12 years of studying to take this exam that will determine which university they can enter.

To support their hard work many people including celebrities, send cheers and played good samaritan to exam takers.

Jungkook commented, “It’s important to be in a good condition.”

While J-Hope jested, “You have to forget BTS while taking the KSAT.”

Suga, on the other hand said, “Things happen in life, and you can do badly in an exam. But have courage. Have faith in yourself that you will do well on the test.”

Meanwhile, BTS’ leader RM advised “The weather tends to be cold on the day of the exam, but unlike the weather, I hope you will return with a heartwarming result.”

Korean songstress, IU, also shared a video message to students. She said, “The weather seemed to be getting colder, and it’s time for the KSAT. UAENAs, don’t be nervous, and think over what you’ve studied thoroughly and carefully and take the exam without regrets.”

EXO’s Chanyeol also showed his support and wrote on his Instagram, “Around this time of the year, I get lost in the thought that time flies by awfully fast. Regardless of the result, I pray that you will pour out everything you’ve worked for until now.”

IZ*ONE with one of their member, Kim Chaewon, who will be taking the exam as well, posted a video message and cheered, “All the test-takers in Korea must be nervous and anxious. We hope you will get good results as you worked for it for a long time.”

fromis_9 mentioned, “Don’t get nervous, and take care of yourself. We hope you get good results.” Their member, Chaeyoung, is scheduled to take her exam as well.

Actor Park Hae Jin contributed a video message saying “You worked very hard. I pray that you get the result you want, and do well on the exam.”

Meanwhile actor Song Jae Rim woke up early and  went out on the streets to give a ride to students to their test sites with his motorcycle. The actor also posted a word of encouragement in his social media.

It is not a secret that some of the K-Pop idols are also in their high school years and are juggling between school and performing. Here are some of the idol exam takers who are also anticipating to enter their dream universities

The girl group Momoland, clad in their thick parka jackets, went out to cheer and send off  their member, Ahin, who took her exam at Gocheok High School in Seoul’s Guro district.

Stray Kid’s Hyunjin was also one of the 600,000 students who took the exam. He showed up in a white parka and smiled to the camera, without having a trace of nervousness.

Posted by Tongtongtv on Wednesday, 14 November 2018

Meanwhile, IZ*ONE members Hyewon and Sakura send off their fellow member Chaewon to her testing site

Posted by Tongtongtv on Wednesday, 14 November 2018

We wish all students good luck and hope that they will be able to get accepted in their dream universities.