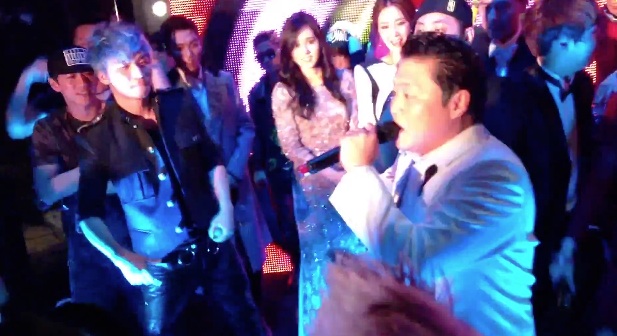 A video of PSY and BIG BANG ‘drunk’ at the MAMA after party has surfaced online after it was uploaded onto YouTube.

Titled as “PSY & Big Bang Drunk @ MNET MAMA Award 2012 After-party Performance” the video shows PSY performing his hit song Gangnam Style but the star appears to struggle to focus as he takes a puff from his cigarette.

BIG BANG members Daesung, Taeyang, TOP and G-Dragon also appears in the video but all are standing stationary except for Daesung who dances next to PSY hyper-actively.

Other stars such as actor Yoon Shi Yoon could be seen in the video including an un-identitied woman in a red dress who’s holding a glass of champagne.

During the performance, the music cuts off and G-Dragon takes over the microphone and sings the remaining words of Gangnam Style. As the crowd wonders what had happened to the music, various people could be heard repeatedly yelling out, “What the f*ck” over the microphone.

Who could blame them for having so much fun though? Whether there was alcohol involved or not, Gangnam Style took home the grand prize for Song Of The Year and BIG BANG won the grand prize of Artist Of The Year, bringing YG Entertainment’s trophy count to nine on the night. That’s definitely a reason to celebrate.