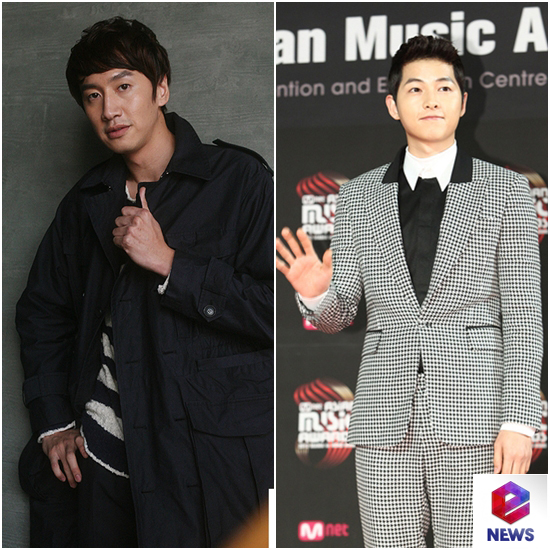 Actor Lee Kwang Soo is proud to be an intimate friend and colleague of Song Joong Ki.

In an interview with eNEWS, Lee Kwang Soo revealed that he often “received questions about Song Joong Ki from the media after filming the drama”, and “he feels good and is proud to be a friend of one who is now in the spotlight and is receiving lots of love”.

“Although there have been many questions about whether I feel a strong sense of rivalry towards Song Joong Ki, I think that from the moment I was born, it was already determined that I would go down a path different from Song Joong Ki’s. Even while we were filming ‘Running Man’ together, our paths deviated from one another’s. As people walking on different roads of life, it is silly to feel jealous or compare oneself against the other. Knowing well how much efforts my friend has put in, in order to be where he is right now, it feels great being able to see him attain success”, says Lee Kwang Soo.

Lee Kwang Soo starred in KBS2’s Wednesday and Thursday 21:55 drama ‘The Innocent Man (Nice Guy)’ as Jae Gil, the best friend of lead male protagonist Kang Maru, played by Song Joong Ki. A righteous young man who dishes out advice to his friend, Lee Kwang Soo portrays a loyal friend who is full of genuine sentiments. In a display of his acting prowess, Lee Kwang Soo caused  viewers to cry buckets of tears at the sight of Jae Gil in a flood of tears after finding out that his friend Maru is ill.

“I think Joong Ki and I are able to act well together due to the fact that we are friends in real life as well”, says Lee Kwang Soo. “I place Joong Ki into Maru’s shoes and ask myself what I should do [as a friend] and with this thought in mind, I am able to express the emotions much more naturally”. Conveying his gratitude to Song Joong Ki, Lee Kwang Soo says that he has to thank his friend for helping him to immerse himself in the role while on the set.

Having finished filming for the drama, Lee Kwang Soo is in the midst of reviewing his activities for next year. He will return to greet audiences in his first movie ‘My Little Hero’ next year on the big screen.

Hellokpop, as an independent Korean entertainment news website (without influence from any agency or corporation), we need your support! If you have enjoyed our work, consider to support us with a one-time or recurring donation from as low as US$5 to keep our site going! Donate securely below via Stripe, Paypal, Apple Pay or Google Wallet.
25
SHARES
FacebookTwitter
SubscribeGoogleWhatsappPinterestDiggRedditStumbleuponVkWeiboPocketTumblrMailMeneameOdnoklassniki
Related ItemsKBS2Lee GwangsooMy Little HeroNice GuySong Joong KiThe Innocent Man
← Previous Story Clazziquai Project returns with “Can’t Go On My Own”
Next Story → Australian Prime Minister predicts K-pop will end the world