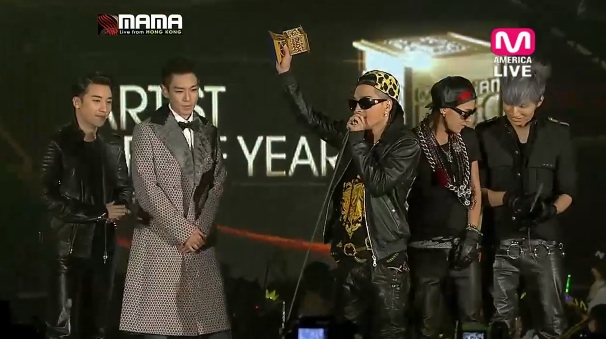 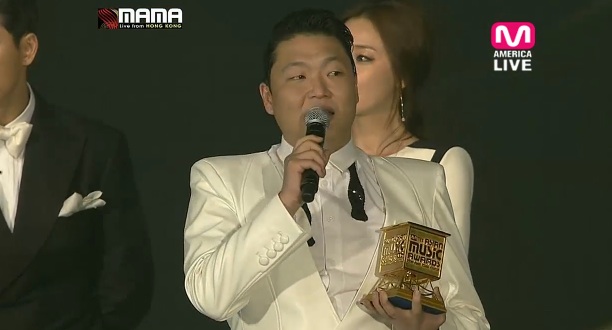 PSY’s Gangnam Style, Super Junior and BIG BANG have all taken out the big prize at the 2012 MAMA Awards.

PSY has been awarded with MAMA’s Song of the Year award for his ‘800 million’ hit song, Gangnam Style which has exposed K-pop to the world. Picking up his third gong for the night (Best International Act, Best Music Video), the 34 year old rapper said he “could not forget this year,” and revealed that last year he was actually “worried” about his music career. He thanked everyone in the K-pop industry for contributing to the growth of K-pop.

Super Junior also took home three awards last night after receiving Best Global Male Group, Mnet LINE Award and Album of the Year for Sxxy, Free and Single. The group said they were dedicating the win to Leeteuk who is currently serving in the military.

BIG BANG shared the spotlight with their label mate, PSY after they took out Artist of the Year. The group also won the Guardian Angel Worldwide Performer for exceptional performances.

Held in Hong Kong this year, MNET’s Asian Music Awards (MAMA) was aired to over 80 countries, making it one of the biggest music award shows in the world.

The star-studded award ceremony also invited US performers B.o.B and Adam Lambert to perform. K-pop singers Seo In Young and K.Will performed with B.o.B on his hit songs Airplanes and Nothin’ On You.

Other anticipated performances were BIG BANG’s monster themed performance and Super Junior’s 007 James Bond performance. Mnet also promised that PSY’s Gangnam Style performance will be better than his MTV performances. You can be the judge, watch it here.

K-pop music is advancing beyond Asia and fast becoming a global phenomenon.  The Mnet Asian Music Awards remain the only awards ceremony of its kind in the world, bringing fans the very best in Asian entertainment.

11:59PM A big thank you to my colleagues Nicole and Kenny for helping me cover this event. Thank you to everyone who followed this article during the event, we hope you had a good night. Until next time, Phillip.

11:18PM PSY’s Gangnam Style wins Song of The Year! PSY said he “could not forget this year,” and revealed that earlier last year he was actually “worried” about his music career. He thanked everyone in the K-pop industry for contributing to the growth of K-pop.

11:13PM Album of the Year goes too… DRUM ROLLS… SUPER JUNIOR’s SXXY, FREE AND SINGLE! The group said they were dedicating the win to Leeteuk who was in the military.

11:07PM Here it goes! The Artist of the Year award goes to… BIG BANG! Congratulation boys! This is their second award tonight.

11:04PM Jackie Chan presents the first grand prize of the night. Jackie Chan calls a PSY a “legend” for achieving his dreams.

11:00PM PSY receives standing ovation for his performance. What an exceptional performer.

10:54PM Mnet has put together an epic introduction package for PSY’s performance. He’s about to go on stage to perform. Crowd goes wild for Gangnam Style – even Taeyang.

10:50PM Super Junior wins Best Global Group – Male! It is their second gong of the night.

10.46PM The award for Best Global Group – Female goes to… drum rolls… KARA. Congratulations! All that promotion in Japan and around the world has paid off! 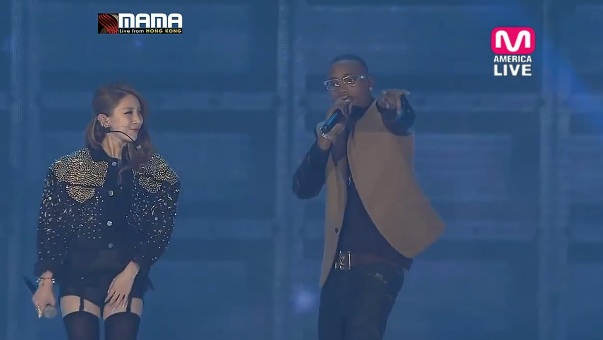 Seo In Young performs US smash hit Airplanes with B.o.B

10:35PM The MAMA awards are back. Special stage by B.o.B and Seo In Young. Seo In Young does Hayley William’s part in Airplane justice! What is she wearing though…?

10:24PM How good was BIG BANG’s performance? Another break time before they announce the biggest awards of the night! Artist, song and album of the year! Who will win?

10:15PM ABOUT TIME! Big Bang is performing now! Their performance is titled “THE MONSTER IN ME”. Sounds creepy… but it’s so epic!

10:11PM The MAMA Line Award goes to Super Junior. Super Junior picks up their first award of the night. 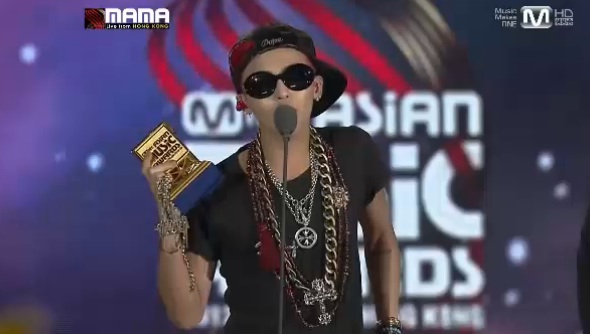 9:50PM The Guardian Angel Worldwide Performer award goes to BIG BANG, who has performed to over 400,000 this year! Wow, congratulations. Epik High collected the award on behalf of Big Bang, who was preparing for their performance.

9:42PM Natthew of Thailand and Time Z of China win Best New Group for their countries.

9:39PM The moment is here. Who will win the New Asian Artist Group award? Congratulations… EXO!

Sorry Bieber, the Internet is about to break, and it’s not because of you, but PSY 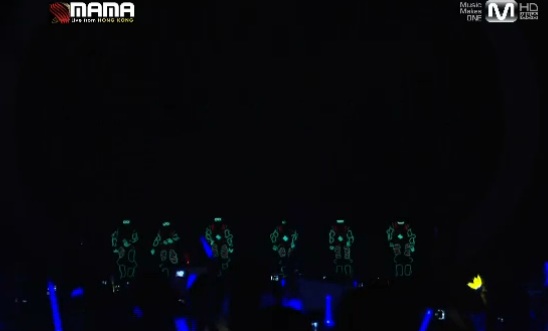 9:17PM MAMA awards are back! Super Junior opens their performance with a James Bond theme inspired performance. They perform SPY and gives an extravagant light performance for Mr. Simple. The crowd goes wild. 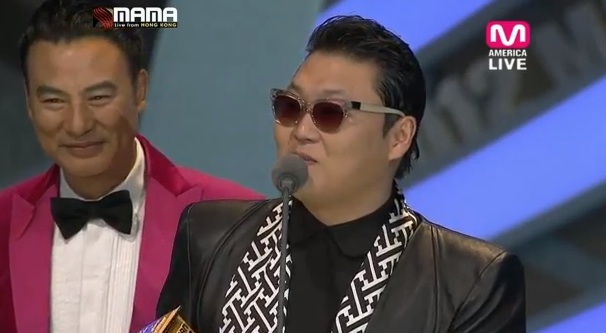 8:46PM PSY wins the Best International Artist award. Surprised? I’m not. Congratulations! “Thanks for giving me this. 2012, I will never forget this year.” The Gangnam Style singer said.

8:38PM f(x)’s Krystal introduces American Idol contestant Adam Lambert. He performs Whataya want from Me. f(x)’s Amber mouths the words, she must like the song.

8:06PM The ceremony is back. Wooyoung is paying tribute to JYP’s Memorial. Since when did JYP die? How did I miss this important piece of news?

7:55PM There’s another break now. Big Bang and PSY are performing soon. Has everyone enjoyed the night so far?

7:47PM A cute little Chinese sings about K-pop and about how she’s excited to watch the K-pop performances. Cute.

7:37PM Chinese Actor/Singer Leehom performs one of his ballads. This guy looks seriously young for his age!

7:30PM And the Best Male Group goes to… BIG BANG! They beat Super Junior, BEAST and SHINWA to the award. Congratulations boys. Fantastic Baby! GD collects the awards on behalf of the group.

7:28PM Actress Han Ga-In presents the next award for Best Male Group. She introduces herself in English. Didn’t know how good her English was!

7:25PM And the crowd goes crazy for the Troublemaker couple Hyuna and Hyun Seung

7:17PM PSY wins Best Solo Dance Performance. As if we didn’t see that one coming.

7:11PM Ahhhhh! Actor Soong Jong Ki is MCing tonight and he speaks a bit of English. Not bad, not bad.

7:05PM G-Dragon shows up on stage and calls out “Hey MAMA!” He’s rapping about the MAMA awards. He introduces Ailee.

6:55PM Seems like they are taking an ad break because they’ve finish with the red carpet. Maybe the awards ceremony is about to begin! Who will win tonight?

6:43PM PSY HAS ARRIVED! Mnet has promised a better performance of Gangnam Style than MTV. Let’s hope so!

6:39PM Super Junior walks the red carpet, all in black. SM Entertainment must like dressing all their stars in the same colour or something. They are nominated for 5 awards tonight. 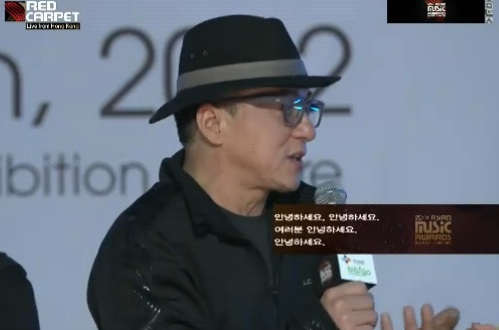 6:36PM Jackie Chan arrives on the red carpet and says “Mian-hae-yo, we just came and missed everything.” I love this comedic genius.

6:18PM B.o.B arrives at the red carpet. He will be performing later tonight.

5:46PM American Idol’s Adam Lambert arrives on the red carpet. Commentator dubs him as the male Lady Gaga. Says he likes PSY and wants to steal all of Big Bang’s clothes. Lambert will perform later tonight.

5:37PM KPOP Star runner up, Lee Hi (1,2,3,4) arrives on the red carpet and says she’s nervous about performing for the first time. She’s excited to see SHINee and PSY.

5:32PM Bad boys B.A.P performs No Mercy and Stop It. I like what they’re wearing, especially their pants.

5:13PM Nominated for 4 awards this year, SISTAR has arrived on the red carpet.