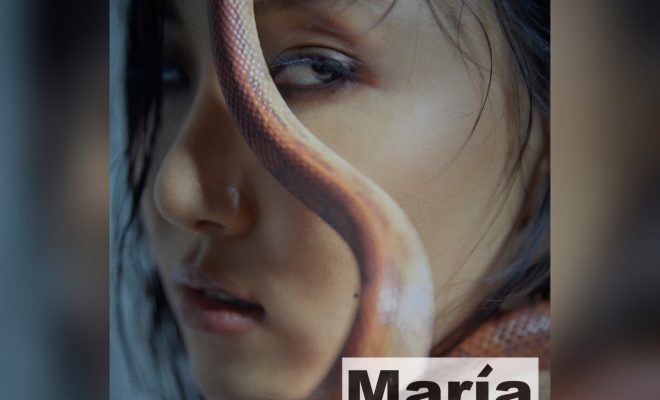 MAMAMOO’s Hwasa stirs up fans’ excitement as she announces her upcoming solo album alongside a beguiling teaser photo!

Hwasa stunned with her magnetizing visuals on the enthralling photo for the upcoming album, which is titled María as an ode to her baptismal name. The image focused on the singer’s fierce gaze as a snake slithered around across her face.

With its overall enigmatic aesthetics, the image certainly raised fans’ anticipations for the singer’s album prior to its release on June 29 at 6 PM KST.

While this is the singer’s first mini-album it certainly isn’t her first solo venture. In February 2019, the MAMAMOO vocalist released her smashing solo track “Twit” which earned a thundering response from fans.

Hwasa’s mini album being the third solo project within MAMAMOO after leader Solar set fire with her track “Spit It Out” and rapper Moonbyul mesmerized with her album Dark Side Of The Moon and its repackaged version Moon that included her hit track “Absence.”

Furthermore, Hwasa also gave fans an out of this world experience with her sweet sounding voice on the track “Orbit” from the OST of the highly-acclaimed K-Drama The King: Eternal Monarch. She also joined forces with label mates ONEWE on the pop rock/R&B track “Q” wherein she left listeners speechless with her sultry vocals.

Hellokpop, as an independent Korean entertainment news website (without influence from any agency or corporation), we need your support! If you have enjoyed our work, consider to support us with a one-time or recurring donation from as low as US$5 to keep our site going! Donate securely below via Stripe, Paypal, Apple Pay or Google Wallet.
FacebookTwitter
SubscribeGoogleWhatsappPinterestDiggRedditStumbleuponVkWeiboPocketTumblrMailMeneameOdnoklassniki
Related ItemshwasaMAMAMOOsolo album마마무
← Previous Story Golden Child’s Jaehyun And Seungmin Show Their Riveting Charms In “Take A Leap” Comeback Trailers And Concept Photos
Next Story → 3YE Stirs Up Expectation With Scheduler For First Mini-Album “TRIANGLE”