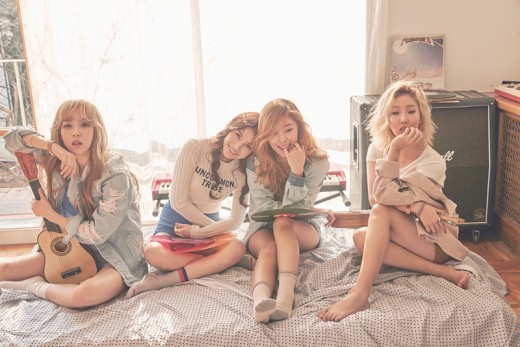 Mamamoo is confirmed to release its first ever full-length album next month.

According to the group’s agency on January 26, Mamamoo will drop its first full-length album since debut. Ahead of it, the girls will release a free single as a surprise gift for fans on January 29. The first album is slated for release in late February.

Mamamoo (Solar, Moonbyul, Wheein and Hwasa) debuted in 2014 with Mr. Ambiguous, off its mini album Hello. The group’s latest comeback was in last June with Um Oh Ah Yeh, off its third mini album Pink Funky.

Hellokpop, as an independent Korean entertainment news website (without influence from any agency or corporation), we need your support! If you have enjoyed our work, consider to support us with a one-time or recurring donation from as low as US$5 to keep our site going! Donate securely below via Stripe, Paypal, Apple Pay or Google Wallet.
FacebookTwitter
SubscribeGoogleWhatsappPinterestDiggRedditStumbleuponVkWeiboPocketTumblrMailMeneameOdnoklassniki
Related ItemsHellohwasaMAMAMOOMoonbyulMr Ambiguouspink funkySolarum oh ah yehwheein
← Previous Story BIGFLO’s Jungkyun To Debut In Japan Next Month
Next Story → Fiestar’s Yezi Pours Herself A ‘Cider’ In MV Teaser