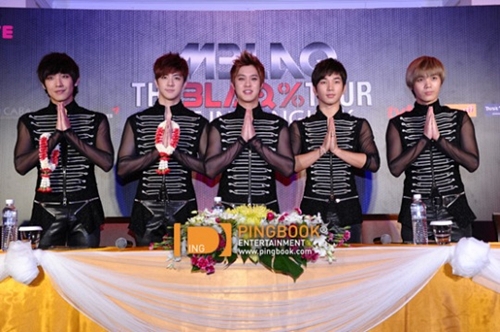 MBLAQ adds additional dates to ‘THE BLAQ% TOUR’ in Japan

Due to successfully selling all the concert tickets for THE BLAQ% TOUR in Osaka and Tokyo, MBLAQ has added an additional two dates to the tour. CJ E&M hosted a press conference on the 2nd of August to announce that MBLAQ will return to Japan in the fall to perform in Yokohama on the 8th and 9th of September.

Surprised by the turnout of their previous showcases in Japan, MBLAQ commented:

“We didn’t think that the atmosphere during the Japan leg of our tour was going to be so great but it felt really good to hear that the shows have been all sold out.”

MBLAQ is currently preparing for THE BLAQ% TOUR in Taiwan on the 18th of August where the members will perform their hit singles, an exclusive track from the duo G.O & Mir, as well as a solo single from Cheondung.