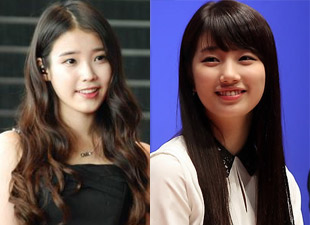 The ‘Nation’s First Love’, Miss A‘s Suzy, and the ‘Nation’s Younger Sister’, IU were recently selected as the new rivals on Secret Chart.

On the September 6 broadcast of Entertainment In TV, both of them took over the Secret Chart and were chosen to be the new rivals as both of the singers display a cute and innocent charm.

Rivals like Song Dae-gwan vs. Tae Jin-ah, and Shin Seung-hoon vs. Kim Gun-mo have been used for comparisons for a long time in the Korean Entertainment and there is now a public urge to see new faces on the list, so, Secret Chart of NEW Rivals was formed.