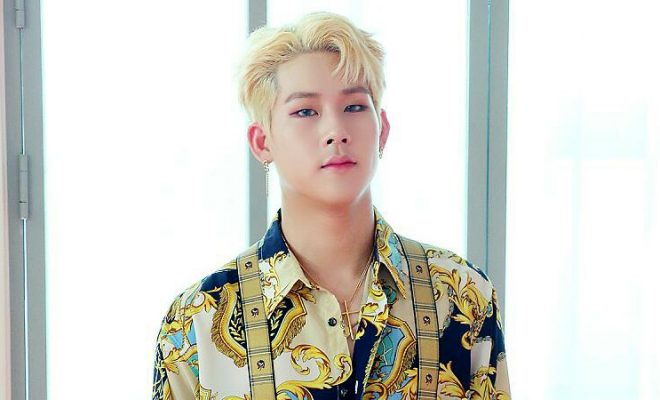 Starship Entertainment shared on March 25 that MONSTA X’s Joohoney will be coming back from his temporary hiatus and resuming his activities with the group!

The MONSTA X member is returning to make everyone’s days brighter and shake the music scene with his powerful rap and vocals once more after taking a well-deserved break.

Last January, Joohoney sat out from the group’s activities after experiencing symptoms of psychological anxiety.

Earlier on March 25, it was shared that he had decided to rejoin the team and resume his activities as his anxiety symptoms had improved thanks to the continuous treatment and rest that he took.

Prior to that, he participated in the reaction video for the group’s latest variety show collaboration with TWOTUCKGOM which fans got to watch through V Live on March 23.

Starship Entertainment then confirmed that the multi-talented idol will be resuming his activities with the group, who is planning for a comeback within the first half of 2020.

Following this news, fans expressed their delighted cheers to have the MONSTA X member back and in good health through the hashtag #WelcomeBackJoohoney on Twitter.

Welcome back to our honeybee! Monbebe are so proud of you for prioritizing your health and taking the time you needed. We’re always here for you! 🐝💛#WelcomeBackJoohoney@OfficialMonstaX @STARSHIPent pic.twitter.com/kfM04D3pFL

i'm really just so proud of jooheon it was never easy to fight what he went through and how he is recovering from it. i'm so so so proud of you. baksu! 👏 #WelcomeBackJoohoney @OfficialMonstaXpic.twitter.com/oi50hgXvu4

words can’t explain how proud i am of jooheon, he’s so damn strong, i really admire him and i can’t wait to hype him up and remind him he’s the best.#WelcomeBackJoohoney

Recently, MONSTA X has continued proving their emergence as global stars with the release of their first full-length English album All About Luv. Marking a huge success, the album made a number five debut on Billboard’s main album chart Billboard 200.

On March 24, they also achieved their first number one entry on Billboard’s World Digital Song Sales chart with the re-emergence of the 2017 hit “From Zero”.

MONSTA X also received much applause in February when they were revealed to have donated 100 million won in private to the international relief and development non-governmental organization Good Neighbors to help prevent the spread and damage of COVID-19.

Hellokpop, as an independent Korean entertainment news website (without influence from any agency or corporation), we need your support! If you have enjoyed our work, consider to support us with a one-time or recurring donation from as low as US$5 to keep our site going! Donate securely below via Stripe, Paypal, Apple Pay or Google Wallet.
64
SHARES
FacebookTwitter
SubscribeGoogleWhatsappPinterestDiggRedditStumbleuponVkWeiboPocketTumblrMailMeneameOdnoklassniki
Related ItemsjooheonJoohoneymonsta x
← Previous Story Ong Seong Wu Makes Us Chase Our Breaths In Dramatic “Gravity” Music Video
Next Story → Stray Kids Acts Out Their Own Youth Drama In “Even A Fool Knows” Music Video