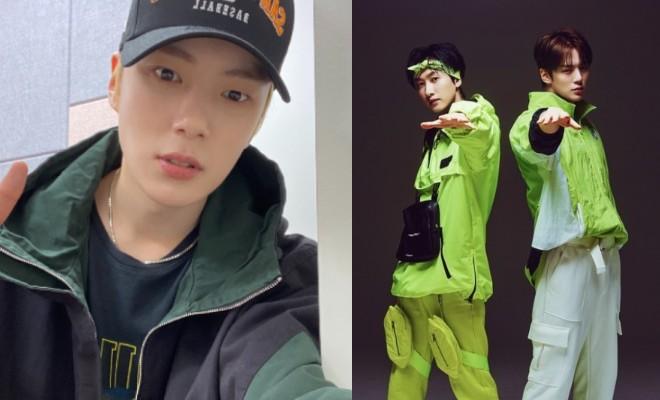 It was bittersweet but we hope to see Eunhyuk and Minhyuk for another season of “Back to the Idol”!

On September 9, the first episode of “Back To The Idol” aired live through the Seezn app. MONSTA X fans rejoiced when Minhyuk was announced as a host for the live dance show alongside Super Junior’s Eunhyuk. Indeed, it was a pleasant start of his continuous growth as an artist. Additionally, the show was a big opportunity to showcase his brilliance and dexterity in hosting.

With “Back to the Idol,” Minhyuk had gently led the show with his quick wits and undeniable chemistry with Eunhyuk. He also makes the guests comfortable, therefore giving a natural big laugh to the viewers.

But as they say, everything has its own ending. On October 28, the last episode of “Back To The Idol” aired with VERIVERY as guests. As the season ended, Minhyuk shared his thoughts as host for a total of 8 episodes.

The cheerful and bright MONSTA X member expressed his bittersweet emotions as the beloved show came to an end. He said that there were lots of ups and downs as the show was broadcasted live yet he had so much fun as he was with Eunhyuk and the warm guests.

MONBEBE’s sunshine also extended his gratefulness to the people behind the show. He appreciated their hard work in making “Back To The Idol” an enjoyable broadcast to watch. He also thanked the viewers who supported him and Eunhyuk along the way.

Relatively, Minhyuk is booked and busy as he appears in various programs such as SBS’ Inkigayo and his “Vogue Ship Show” at Naver’s NOW. Minhyuk also expanded his scope in the entertainment industry with an OST for the Webtoon “She’s My Type” alongside his co-member Shownu. And with Minhyuk creating huge attention, many are curious as to what’s next for the all-around entertainer.

Meanwhile, Minhyuk will have a comeback with MONSTA X on November 2 with the third full album “FATAL LOVE.”