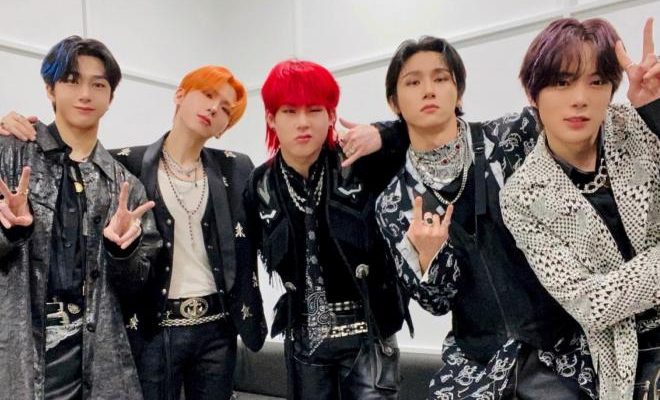 Of course, MONSTA X never fails to exhibit the definition of “powerful” and “perfection” through its first comeback stage for “Rush Hour.”

MONSTA X hints at three marvelous points to watch for at the first comeback stage for “Rush Hour” on Music Bank.

MONSTA X is coming like a blazing comet in the middle of a crowded place with the 10th mini-album No Limit. This marks the group’s return in about five months since the 9th mini-album One Of A Kind in June 2021.

Although a quick comeback, No Limit contains MONSTA X’s colorful and dynamic genre which further proved the group’s powerful image as an artist. In particular, the group’s main rapper Joohoney has produced the title track “Rush Hour” and is set to have its first comeback stage on KBS2 TV’s Music Bank today, November 19 at 5:00 PM KST. Prior to the much-awaited performance, three points were revealed to heighten the anticipation for the high-quality stage.

The MONSTA X members have boasted their intense energy ever since debuting as a group in 2015. They have repeatedly made infinite concept transformations—sometimes charismatic and fatal.

Notably, this recent album conveys the infinite capabilities of MONSTA X which is unlimited no matter what the situation is. Each track also clearly shows the identity and signature of the members.

With Joohoney leading the scene with his self-composed title track “Rush Hour,” MONSTA X plans to capture listeners around the globe with its own spirit and confidence that is second to none.

Ever since MONSTA X’s debut in 2015, Joohoney has been recognized for his musicality through various music works and mixtape releases. This time, Joohoney has presented his second title track “Rush Hour” which is made to set the Kpop scene blazing.

It is no exaggeration that MONSTA X’s teamwork has become stronger than ever under the clever direction of Joohoney. “Rush Hour,” which pervades the album No Limit, not only includes the desire to raise the victory flag over the world but is also an anthem that gives strength and power to the group’s beloved fandom, MONBEBE.

Another point to watch out for is MONSTA X’s dynamic performance that you can trust, listen to, and watch. If this ain’t enough to prove MONSTA X’s intense presence, the group has received its first daesang since its debut at the 2020 AAA winning the “Stage Of The Year” award.  In addition, the talented team showed off its strong residence as a performance idol group representing Kpop by sweeping year-end awards such as the 2020 MMA’s Best Performance Award, the 2020 MAMA’s Best Stage Award, and the 35th GDA’s Best Group Award.

MONSTA X will also present witty point choreographies such as the “lamb skewers” and “twin pistol” dance moves. The clever points alongside the members’ incredible charm and energy are expected to fire a spectacular comeback stage worthy of praises.

Meanwhile, MONSTA X has released its 10th mini-album No Limit on various music sites on November 19 at 2:00 PM KST. The favorite monstas have also fired a spectacular comeback signal with the first comeback stage for the title track “Rush Hour” on Music Bank.