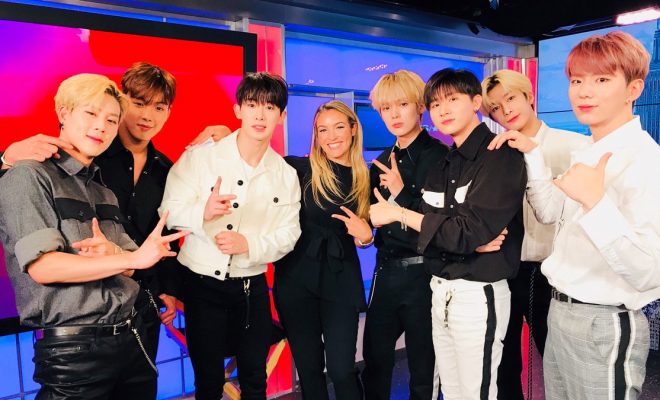 Swinging by American talk shows one after another, Monsta X proves its commanding ingenuity by displaying their charms with witty answers as they connect with global fans.

Starship Entertainment’s 7-member boy group Monsta X garnered an explosive interest from US media while touring North America. The group was featured on FOX5’s popular talk show, Good Day New York, on July 23rd and they recently showed their charms in an interview with Access Hollywood.

The overseas visit is part of Monsta X’s World Tour The Connect in US. They just finished performing in Houston on the 29th and will be heading to San Francisco on August 1st and Los Angeles on August 3rd for the last two legs of their North American tour.

Monsta X had finished their Chicago show giving three hours of unforgettable memories to their Chicago fans. Monbebes cheered enthusiastically for the boy group, bringing up the energy inside the concert venue.

The next day, they traveled to New York for their live interview with Good Day New York and now, being a testament to international fame, they are the second Kpop group to be interviewed by Access Hollywood!

They did their interview without an interpreter as I.M. skillfully translates the questions for his bandmates. They are currently being swarmed by interview requests as Monsta X actively promotes in the US.

They also had an in depth sit-down chat with BUILDseries, a popular live talk show where fans interact with the stars. The group talked about their world tour, music recommendations, dream collaborations with Western acts and some trivial information about the members that would surely delight their fanbase.

They also had interviews with Allure and iHeartRadio. In a tweet, they also announced that their “puppy interview” with Buzzfeed will be released soon.

Monsta X revealed plans to visit Canada when they met Billboard for an adorable chat. When asked about their favorite western artists, Jooheon jumped in with a nod to Backstreet Boys as he sang quick snippets from songs of the iconic American boy group.

They were also asked to describe their fans with five english words. Minhyuk gave the words “love” and “gift”. Ever the Monbebe enthusiast, Wonho added the word “forever” as Changkyun cleverly whispered “Wakanda Forever” in reference to Monsta X’s love for film Black Phanter. Jooheon responded “inspiration” while Hyungwon said Monbebes are “happiness” for him.

Watch a snippet of their Billboard interview below where they pointed out what they love about each other.

Monsta X is in the middle of their world tour and is now blazing through their North and South American stops. Keep updated with Monsta X through their Twitter.