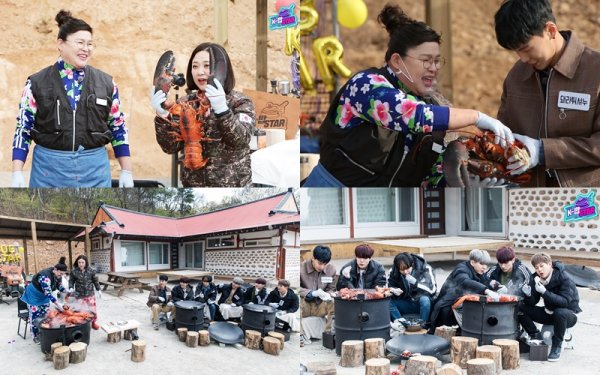 By Yann | May 12, 2020
23
SHARES
FacebookTwitter
SubscribeGoogleWhatsappPinterestDiggRedditStumbleuponVkWeiboPocketTumblrMailMeneameOdnoklassniki

A mukbang featuring MONSTA X where they are served with giant lobsters fit for kings? You bet we’re watching it!

MONSTA X will appear in the fun and famous food variety show K-Bob Star to showcase their super-special lobster mukbang.

At the filming site of the recent recording of K-Bob Star, the program’s hosts Lee Young Ja and Kim Sook prepared as many as 17 giant lobsters for the boy group, who came as guests ahead of their comeback.

“I thought today was the last episode (preparing for this menu),” Kim Sook said, shaking her head and making everyone laugh.

MONSTA X, who saw a mountain of lobsters piled up on the lid of a pot, was amazed, especially after sighting the overwhelming presence of a 4kg extra-large lobster which caught all of the members’ eyes.

In order to take home the lobster which won their attention, the members must compete in making firewood. The scene soon heated up with each member’s burning desire for victory, and Shownu even broke the axe in two after throwing an unexpected show of strength which surprised everyone.

With this, the curiosity has risen over who will be the hero honoured with the chance to eat the 4kg lobster after the fierce and tactful battle.

Additionally, the program’s episode showed Minhyuk, who was moved by the special recipe for the lobster, asking for the leftover food to be packed afterward. The singer also reportedly revealed his “true love” for K-Bob Star.

The anticipated meeting between MONSTA X, Lee Young Ja and Kim Sook, and a super-special lobster mukbang will be unveiled on the K-Bob Star YouTube channel at 6 PM KST on May 12.