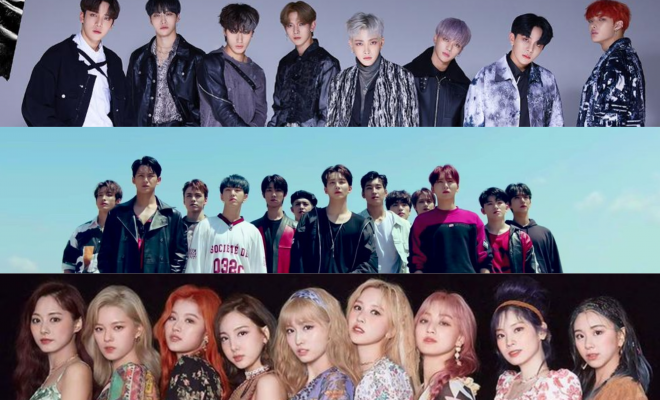 Music Bank thrilled fans from all fandoms with their announcement of a special mid-year episode, airing June 26. The program unveiled the event in a series of Twitter posts, teasing the surprises to come. In commemoration of the year’s halfway point, numerous idol groups have prepared film-themed stages.

In Music Bank’s first teaser, the program listed the various movies each group took inspiration from. Additionally, beside the film concepts, a small timestamp is listed which indicates the length of the song the group will perform. The poster raised fans’ speculations, causing many to try to guess which movie each performer will take on.

The movie concepts revealed include A Fistful of Dollars, Breakfast at Tiffany’s, Kingsman: The Secret Service, Pirates of the Caribbean, Woochi: The Taoist Wizard, The Phantom of the Opera, Ocean’s 8, The Little Prince, Psycho,식객  (a Korean cartoon), Fast & Furious, Snow White and the Seven Dwarfs, a Disney special, Chipmunks, and Romeo And Juliet.

Music Bank also released a photo of one of the artists, Golden Child, confirming their participation.

With a flurry of artists making their comebacks this summer, fans are eager to see whether artists will unveil stages of their newer tracks or old favorites.