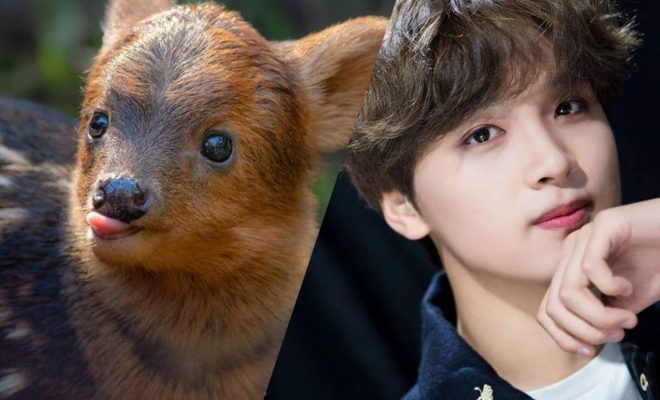 Meet Haechan — the baby pudu that will brighten your days like NCT’s Haechan!

Fans of NCT’s Haechan came together to raise 2,000 US dollars to secure the right to name a baby pudu at the Los Angeles Zoo and Botanical Gardens after the NCT member.

Typically, donors are given the privilege to name the animals born at the zoo.

A male southern pudu was born at the #LAZoo on December 19, 2018 to first-time parents Steph and Mario. As a member of The Association of Zoos and Aquariums, we participate in the Species Survival Plan (SSP) for the southern pudu, whose population is declining in the wild. pic.twitter.com/w18NAhBHFk

However, the zoo gave NCTzens the opportunity to officially name the newborn pudu after Haechan whom fans believe resembles a pudu, a species of South American deer regarded as the world’s smallest deer.

Fans wasted no time as they joined forces to raise the much needed amount of 2,000 US dollars.

It's come to our attention that Haechan of the K-pop group @NCTsmtown is considered by many of his fans to resemble an adorable pudu. So we want to give fans the opportunity to officially name the newborn fawn after the singer! https://t.co/s00mYUwdvb pic.twitter.com/zRvo8UMHsa

Although the Los Angeles Zoo and Botanical Gardens gave them until January 14 to complete the goal, NCTzens managed to meet the goal in only three hours after the zoo announced the donation drive – a total of 2,707 US dollars.

The zoo will use the amount collected in support of conservation work. It also invited Haechan to visit his namesake one-month-old pudu in his next trip to Los Angeles.

Meanwhile, Haechan took a short break from performances following an injury last December. The NCT member twisted his right leg, fracturing his tibia or shinbone. He was absent from the year-end activities as he was advised by the doctor to rest for his recovery.