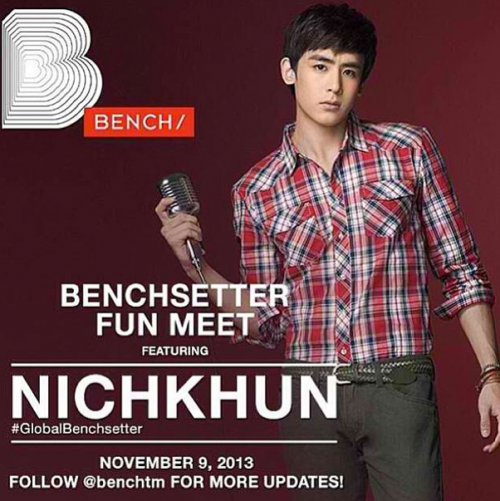 2PM‘s Nichkhun , as a Global Benchsetter,  is confirmed to make his third visit to the Philippines for a special meet and greet event for his product endorsement of BENCH in the country.

Nichkhun made his first trip to the country in early 2010 with actress Song Ji-hyo for a Korean TV Show.  JYP Entertainment’s hottest group first visited the country together last March for a one-night concert in Pasay, Manila. This time, Nickhun is coming alone for his 2-venue fan meeting on November 9.

BENCH finally announced the date of his fun meet in the Trinoma and the SM Mall of Asia at 3PM and 5PM respectively. The event is made possible by BENCH and in partnership with Wilbros Live. The same team-up who brought the successful My Everything Tour of Lee Min Ho to Manila last July.

Nichkhun can’t wait to see his Filipino Hottests. He is lost for words as he tweeted a response to a fan on October 15.

“@ALEXASACLAO: @Khunnie0624 Are you excited to meet your Filipino fans? :)” yes more than I can verbally describe! Been waiting for it! = ]

He became a Global Benchsetter, which is what he and other foreign artists who endorse the brand are called, earlier this year and promised to come to the Philippines for an intimate meeting with his supporters.

If you can’t get enough of Nichkhun on his billboards around the metro, how about a version of him in motion? Watch the behind the scenes clip below from BENCH and if you think this is just what you need, join the promo for a chance to win M&G passes for November 9! Visit the BENCH website for the promo mechanics: