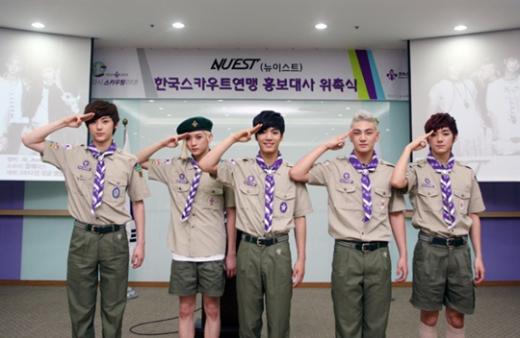 NU’EST has been recognized for their strong teen message and have become the new faces of Scouts in Korea!

The NU’EST boys have become the official endorsement models and honorary ambassadors for The Korean Scout Association. The association has about 370 000 members in 20 bureaus.

A representative from the Scout Association explained why the picked NU’EST:

“Not only are all the NU’EST members being in their teens, they also send strong messages for teens and youths with their debut album ‘Face’ as well as their new album ‘Action’. So we decided that it would be fitting to appoint them as the ambassadors of the scouts, who support social contributions.”

NU’EST made their debut with the song, Face, which addressed bullying in high school. For their recent comeback, their song Action dealt with conformity. As honorary ambassadors, NU’EST will now be taking part in promotions for The Korean Scout Association, even though currently they are promoting for their first mini album, Action.