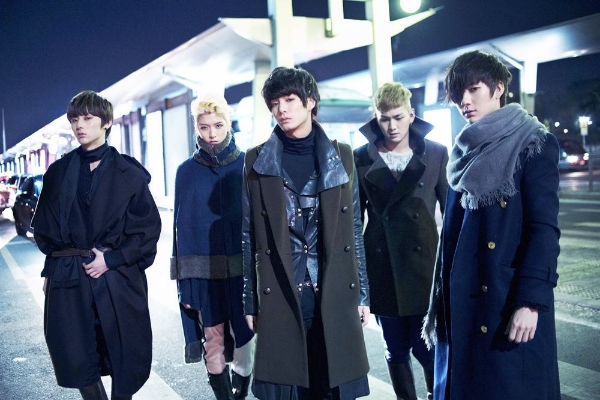 JNation Entertainment officially announces its plans to bring in ‘2013 NU’EST L.O.Λ.E TOUR’ to Singapore. Mark the date down, June 22, as it will be the group’s first ever full-fledged showcase in Singapore!

Pledis Entertainment’s one and only boy group, NU’EST, was formerly known as the Pledis Boys. Prior to debuting, the members were already exposed to the entertainment scene as backup dancers and featured in multiple live performances and music videos for labelmates After School.

Comprising of 5 members – JR (leader), Aron, Baekho, Minhyun and Ren, NU’EST made their official debut in March 2012 with title track Face. The debut song was made popular by its unique choreography which includes the chair-dance.

The group sets themselves apart from the saturated industry by injecting social messages into their songs. Aiming to be ‘the voice of teen generation’, their meaningful lyrics talk of issues such as school violence and bullying (1st single – Face), striving for freedom, individuality and dreams (1st mini album – Action). Their recent comeback veered away from the catchy electro tunes and highlights their vocals with an R&B ballad titled Hello.

NU’EST has been staging many overseas performances. Recent ones include K-Con 2012 in California, Korean Music Wave 2013 in Bangkok, and not forgetting their 2-day debut anniversary concert in Tokyo, Japan. This will be their second time in Singapore, since the mini-showcase held last year.

Expect to be electrified and blown away by this urban electro group with their talent, charms and visuals!

* You need to be a VVVIP/VVIP ticket holder to be entitled fansign from NU’EST.

Ticket can be purchase online at Ticketbrite  or Call +65 9775 9169 You can also email to [email protected], if you are unable to purchase it online.