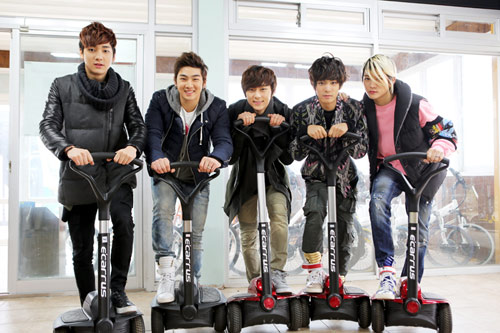 NU’EST in Jeju to try out ECARRUS with fans

Popular idol group NU’EST has been gaining interest for the fan meeting they held.

On November 17th, NU’EST went to Jeju Island with their fans to try out the electric bicycles. The mini fan meeting was titled Sweet Jeju Island Date. NU’EST and fans were able to try out ECARRUS.

NU’EST’s agency said, “NU’EST member Baekho‘s hometown is Jeju Island but we’ve never been to Jeju to perform. But there were so many fans who were very supportive of them in that place. Since the fans don’t have too much opportunity to meet the artists we prepared an event for them to try out the electric bicycles as a mini fan meeting.”

The netizens who came across this news said, “Jeju fans got lucky”, “I want to go on a special date with those flower boys too”, “Their fan love is very big, for them to go all the way to Jeju for a fan meeting.”, “NU’EST really does a lot of fan meetings. I’m jealous”.

NU’EST has ended their activities in Korea and will be heading overseas for promotion of their next album.

FacebookTwitter
SubscribeGoogleWhatsappPinterestDiggRedditStumbleuponVkWeiboPocketTumblrMailMeneameOdnoklassniki
Related ItemsECARRUSFan meetingJeju IslandNU'EST
← Previous Story 15 actors of Fantagio for Cosmopolitan photoshoot
Next Story → 2AM’s Lim Seulong, “Even if I’m not that good looking, I want to be an actor with charm”