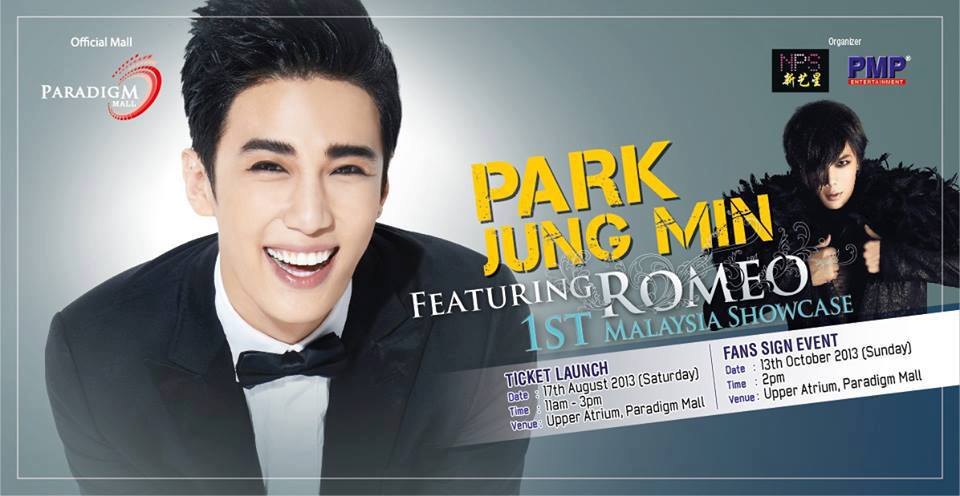 Park Jung Min went solo in early 2011 and had released his debut solo mini album titled ‘Not Alone’. Three months later, he released a dual language (Korean and Japanese) album named ”The, Park Jung Min’ and received good response. Then, he returned to Korea to continue his music career as ‘Park Jung Min’ and released his first self-produced single album entitled ‘Beautiful’. From conceptualizing the album, song selection, to producing sound recordings, Park Jung Min is the man behind this album.  With his designing talent, he also visualizes the music video and album cover.

Besides his singing career, in 2009, Park Jung Min has made his musical debut in <Grease>as ‘Danny Park’, and with his superb acting skills, he was awarded as ‘Best New Musical Talent’ by the Golden Ticket Awards. In 2011, he joined the Taiwan showbiz and did his first idol drama called ‘Fondant Garden’. He also sang the Chinese soundtrack Bad Man and this successfully drives Park Jung Min’s popularity in Taiwan.

Park Jung Min debuted in Japan using the name ‘Romeo’ and had released two albums, titled ‘Give Me Your Heart’ and ‘Tonight’s The Night’. ‘Romeo’ will unleash a different side of Park Jung Min, which is the hidden side of him, primarily relating to Japanese fantasy and dreams. In December 2012, he released a full Japanese album named ‘Midnight Theatre’ and had ranked first in the famous online sales and record stores TSUTAYA.

Beginning of this year, Park Jung Min had eight consecutive <Park Jung Min VS ROMEO Theatrical Tour 2013> “dual personality” concert tours in Japan. The concept of the entire concert was divided into day and night sessions; daytime performance by Park Jung Min who gave the most realistic and charming stage performances, with the evening performance by a complete different personality of the glamorous ROMEO, which shows the dark side of his bold qualities and making this tour a successful momentary story.

Now, the Malaysian organizers have decided to bring Park Jung Min ‘dual personality’ tide into Malaysia, so that Malaysian fans are able to witness Park Jung Min and ROMEO’s singing with the double fascination. For this coming showcase in Malaysia, Park Jung Min’s performances will be a focused version of <Park Jung Min VS Romeo>, which will definitely have a promising new experience. Besides, Park Jung Min will also be having close interaction with his fans through games and activities.

Ticket launch of this showcase will be held on 17th August 2013 from 11am to 3pm at Paradigm Mall (Upper Atrium), Petaling Jaya. The first 100 fans who purchase VVIP or VIP tickets at Paradigm Mall will be entitled to a 10% discount on the tickets. Also, there will be a session in every hour where the organizer will be giving out limited press conference and fan sign passes during the event.

Hellokpop, as an independent Korean entertainment news website (without influence from any agency or corporation), we need your support! If you have enjoyed our work, consider to support us with a one-time or recurring donation from as low as US$5 to keep our site going! Donate securely below via Stripe, Paypal, Apple Pay or Google Wallet.
20
SHARES
FacebookTwitter
SubscribeGoogleWhatsappPinterestDiggRedditStumbleuponVkWeiboPocketTumblrMailMeneameOdnoklassniki
Related Itemsdual personalityPark Jung MinPark Jung Min featuring ROMEO 1st Malaysia Showcase
← Previous Story A-Prince to meet A-LANDS in Malaysia for the first time
Next Story → Lee Jong Suk shows off his abs for High Cut