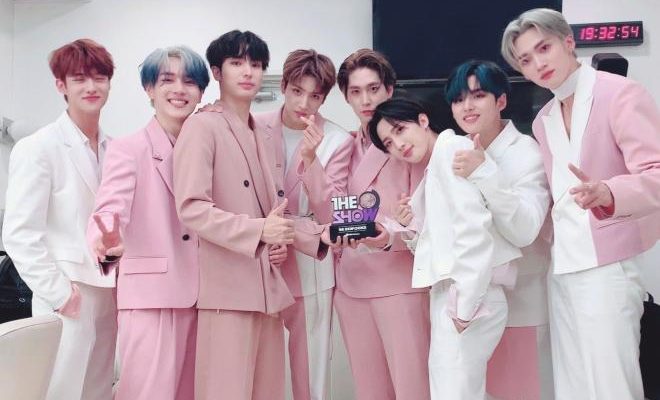 PENTAGON Gets Emotional In Their First Music Show Win Since Debut

Debuted in 2016, PENTAGON has finally received its first-ever music show win with a total of 8,470 points. PENTAGON was against Weki Meki and Weeekly on the October 20th “THE SHOW” broadcast with the song “Daisy.”

It was an emotional scene as the members were seen bowing deeply to express their gratitude. PENTAGON’s reliable leader Hui said that being the first place was not an easy road for them to achieve. He sincerely extended his gratefulness to UNIVERSE fans who were with them through the journey.

The members also expressed their gratitude to those who helped and believed that they can make it to the top. PENTAGON also made a point that everything you dream of will happen and it’s only a matter of good timing.

Hongseok thanked the fans in English saying that them receiving the trophy was because of UNIVERSE. Members Yan An and Yuto then took turns thanking UNIVERSE in Chinese and Japanese, respectively. Then, Shinwon cutely called out to Jinho, who is currently serving in the military, if he is witnessing their first win.

During their encore stage, the members lifted up their leader and equally held him high.

On the other hand, while the members sing their parts on center stage, Kino is crying his heart out as he hugs Shinwon tight.

PENTAGON released its 10th mini-album “WE:TH” with the title track “Daisy” on October 12. “WE:TH” is a combination of “WE,” and “WITH,” which means “together.” It is an album that captures all the moments and emotions we feel living together under the word “sympathy.”

The album was loved by many with its initial sales surpassing 60,000 copies, setting a new record for the group. “Daisy” was described as an alternative rock genre with powerful sounds that express the sadness of being apart.

Dubbed as the “self-producing idols”, the album consists of six tracks that are composed and arranged by the members themselves.