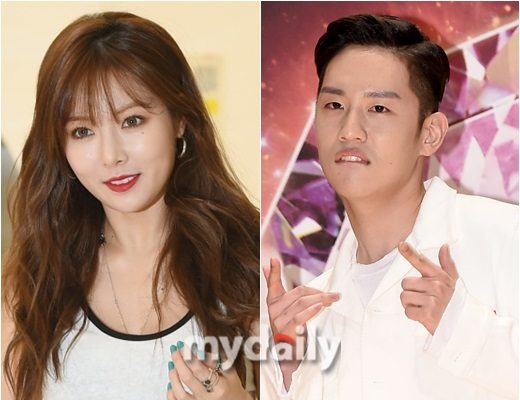 Who do you want to be featured in HyunA’s new album?

As previously reported, HyunA is making her solo comeback on August 1 with a new album.  On July 21, Cube Entertainment’s rep revealed to media outlet mydaily that Phantom’s Hanhae will be featured as rapper in one track, titled Wolf, of HyunA’s new album.

The former 4Minute member has collaborated with many artists like BEAST’s Junhyung, Block B’s Zico, BTOB’s Ilhoon in her previous tracks.

In related news, Hanhae participated in season 4 of Show Me The Money.

We need your support! If you have enjoyed our work, consider to support us with a one-time or recurring donation from as low as US$5 to keep our site going! Donate securely below via Stripe, Paypal, Apple Pay or Google Wallet.
FacebookTwitter
SubscribeGoogleWhatsappPinterestDiggRedditStumbleuponVkWeiboPocketTumblrMailMeneameOdnoklassniki
Related Items4MinuteBEASTBlock BBTOBcomebackHanhaeIlhoonJunhyungPhantomsolo comebackWolfZico
← Previous Story GFriend Clinches First Spot On ‘The Show’
Next Story → Kim Woo Bin Lends His Voice For ‘Uncontrollably Fond’s OST