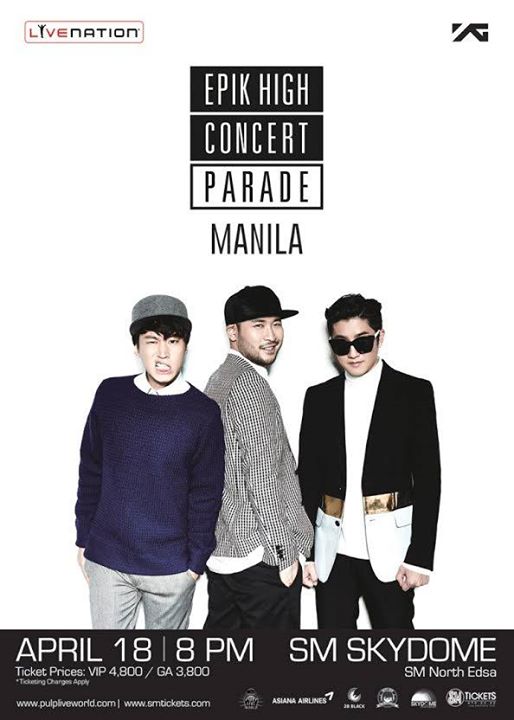 The legendary hip-hop group members Tablo, Mithra Jin and DJ Tukutz will be the latest addition to the roster of Korean acts that have performed in the Philippines. Their concert will be held at SM Skydome in SM North Edsa.

The group released their 8th chart topping album SHOEBOX in October last year and started their Asia tour after that. Having a sold-out success in their first two shows, the hype of this versatile and talented group will surely hit Manila in their first visit to the country.

Tickets to the show has started selling from February 21 at all SM Ticket Outlets.  Fans may also purchase the tickets online via smtickets.com. Tickets are priced at Php 4,970* for VIP and Php 3,930* for General Admission (inclusive of ticketing charges). For PULP Royalty inquiries, fans may call the PULP Royalty hotline at 727-4957.

The organizers have also revealed the floor plan for the one-night only concert, including a “dance pit” within the VIP area. 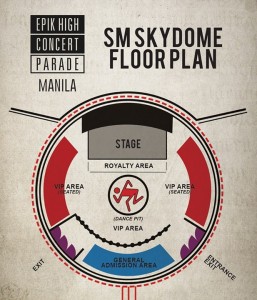 Epik High Concert Parade in Manila is brought to you by PULP Live World, which has also already brought some of the biggest K-Pop names to the Philippines like Super Junior, Girls’ Generation and BIGBANG. This show is also made possible in cooperation with 28 Black.