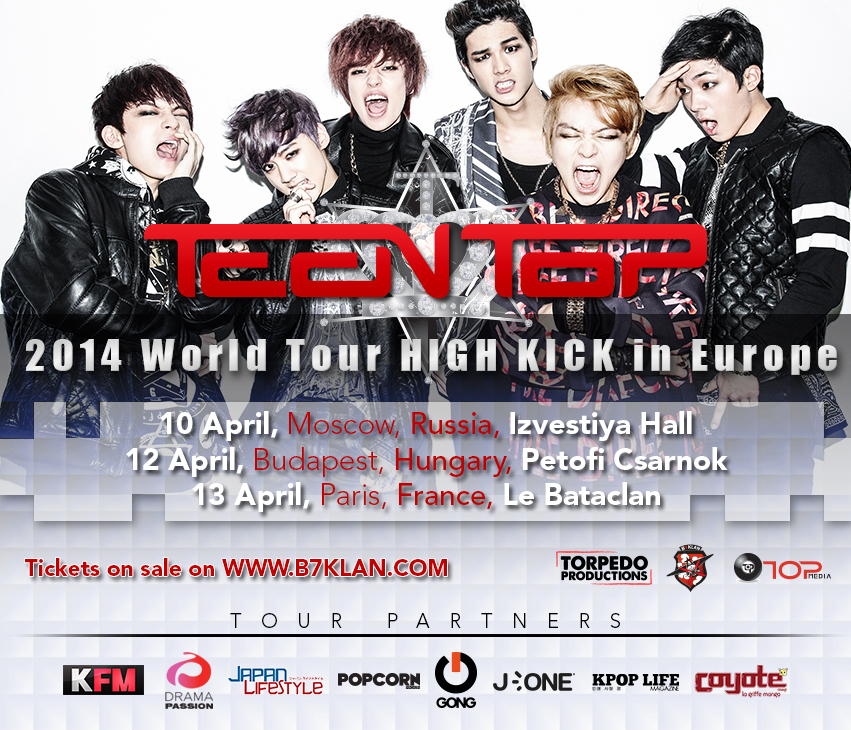 By The Editor | March 22, 2014
FacebookTwitter
SubscribeGoogleWhatsappPinterestDiggRedditStumbleuponVkWeiboPocketTumblrMailMeneameOdnoklassniki

B7KLAN and TORPEDO PRODUCTIONS are very proud to invite you to the new European Tour of TEEN TOP, part of its first World Tour ever: “High Kick”.

The Kpop boy band TEEN TOP will rock Europe in April 2014 with 3 shows in 3 European cities through 3 different European countries: Russia, Hungary and France. The 6 members of this Kpop band are very happy to come back to Europe and meet their European fans once again. They planned to set all stages on fire and will offer special gifts to their fans coming to the shows. People, get ready to rock and prove to them your passion through these 3 amazing and very outstanding shows!

Teen Top (Hangul: 틴탑) is a South Korean boy group that consists of six members: C.A.P, Chunji, L.Joe, Niel, Ricky and Changjo. The band debuted under T.O.P Media, founded by Andy Lee of Shinhwa, in 2010. The members released their first single album Come into the World on July 9, 2010 and made their official debut the following day on MBC’s Music Core.

In February 2013, Teen Top held its first European tour, TEEN TOP SHOW! Live tour in Europe in 2013, making stops in Germany, England, France and Spain. The tour was successful and set a new decibel record for their concert in Paris, France.

April 2014 will see the group return to Europe via Russia, Hungary and France.  Check out Teen Top’s video message to their European fans below:

For more information, check out B7Klan.