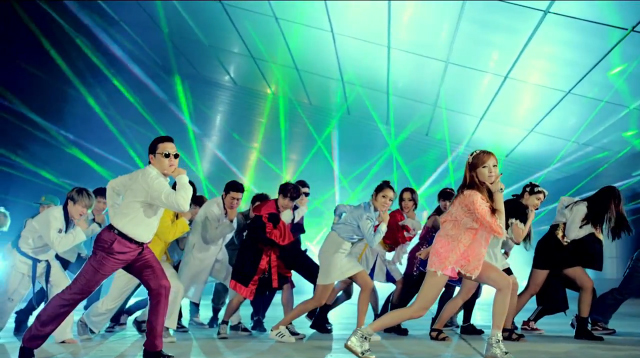 Psy‘s summer hit Gangnam Style has proven to be very popular not just in Korea, but all over the world! Gangnam Style has topped the Melon and Mnet charts for 19 days, and that’s no mean feat. But perhaps the love the song has received outside Korea is even more of a welcome surprise.

Rapper T-Pain showed his love for the track by singing the lyrics on his Twitter back on August 1. Singers Josh Groban and Robbie Williams also publicly stated their fondness for Gangnam Style. Josh Groban told his followers: 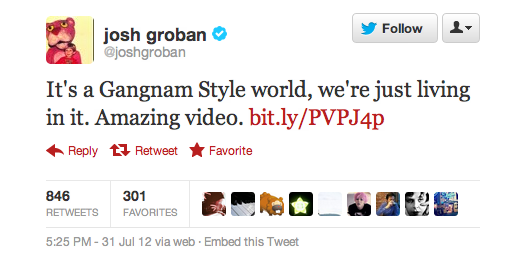 And Robbie Williams shared the music video on his blog, saying:

“TRY WATCHING THIS AND NOT SMILING I DARE YOU….(NOT EVEN A LIP CURL).”

An American talent manager, Scooter Braun, linked to the video and asked:

“HOW DID I NOT SIGN THIS GUY!?!??!…. Watching this again. Going to learn the whole dance. Incredible.”

It’s not just artists have fallen in love with Psy and his Gangnam Style, however. Popular news and media outlets have also embraced the song. 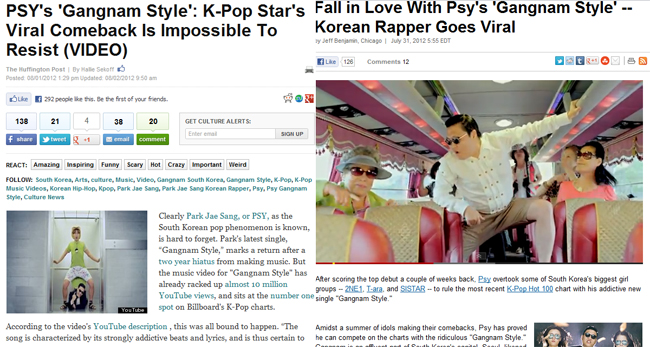 “Psy’s take on Gangnam’s ‘style’ is a reference to fancy living and in the song is used to impress a love interest over a European influenced dance backing. The now-signature horseracing dance move has also gone viral as with Psy’s fellow stars of K-pop.”

And an article on Huffington Post titled PSY’s ‘Gangnam Style’: K-Pop Star’s Viral Comeback Is Impossible To Resist described the song as follows:

“According to the video’s YouTube description , this was all bound to happen. “The song is characterized by its strongly addictive beats and lyrics, and is thus certain to penetrate the foundations of modern philosophy.” Quite a statement, but perhaps not too far-fetched, considering how obsessed we’ve found ourselves. The bumping beats rival the likes of LMFAO’s ‘Party Rock Anthem’ and Far East Movement’s ‘Like A G6.’ What can we say, we’re hooked!”

And if that wasn’t awesome enough, CNN jumped on the bandwagon as well! An anchorwoman from CNN told a Hong Kong anchorwoman that:

She continued saying that:

“Popular website in the U.S., Gawker, basically said that it was the best music video of the year, as Patricia pointed out.”

The woman had the lyrics translated into English, so that everyone could understand what Psy was singing about and highlighted the fun choreography.

“Gangnam is a very affluent part of Seoul in South Korea, and PSY’s basically singing his praise for the women of this era, because even though they are prim and proper during the day, they’re really wild and crazy at night.”