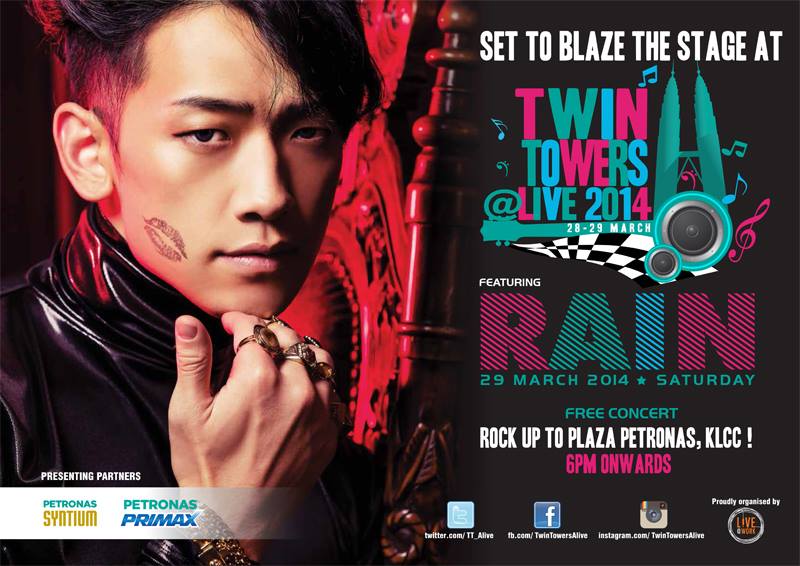 Rain confirmed to perform at ‘Twin Towers Live 2014’ in Malaysia

Kpop superstar Rain is set to heat up this year’s Twin Towers @ Live 2014 in Malaysia as he performs on the second night of the concert on March 29, 2014. In the past, Korean artists like Girls’ Generation, 2NE1, Wonder Girls and U-KISS have made their appearance at said event. International artists from other genres also made their mark through their performances. Some of these are Hoobastank, Orianthi, Kelis, Demi Lovato and the Backstreet Boys.

Rain is one of the forerunners of the Hallyu wave. He first debuted with the album Bad Guy and later on ventured into acting. His popularity brought him to the top when he starred in the Korean drama Full House. Since then, he has released four studio albums, featured in four TV series and appeared in two Hollywood films. Last year, he was discharged from his military service. Even after the two year hiatus, he remained on top as proven by the response to the release of his album Rain Effect. He is expected to perform his recent lead single La Song.

Twin Towers @ Live 2014 is a free concert and is open to all members of the public. This event is organized and managed by Live At Work Sdn Bhd and is presented by PETRONAS Primax and PETRONAS Syntium. Stay tuned to hellokpop for more information!