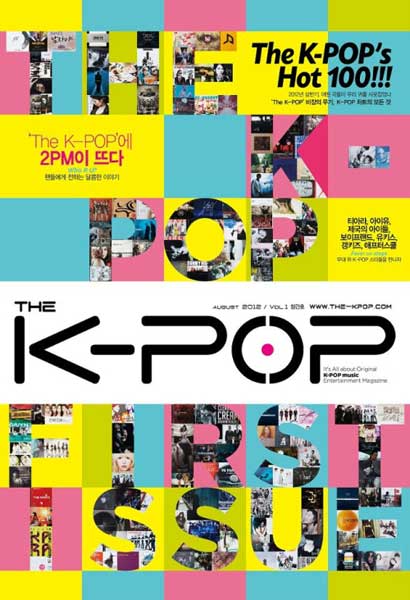 The newest Korean Pop magazine on the block, THE K-POP, has made its way to the stands of Korea and will circulate within Seoul and the Gyeonggi province. THE K-POP officially released its first publication on the 25th of July, and has distributed a good 1,500 issues throughout the said localities.

The first issue of THE K-POP will be special, as it includes several ranking charts based on collected results from the first half of 2012 and an exclusive pictorial of After School, IU, T-ara, ZE:A, U-KISS, Boyfriend, and rookie group Gang Kiz. The magazine will regularly release news, articles relating to K-Pop, celebrity pictorials, and chart rankings provided from Gaon Charts.

The magazine will be available at no fee, but a small charge will apply to those who request to receive the magazine at their residence.

Hellokpop, as an independent Korean entertainment news website (without influence from any agency or corporation), we need your support! If you have enjoyed our work, consider to support us with a one-time or recurring donation from as low as US$5 to keep our site going! Donate securely below via Stripe, Paypal, Apple Pay or Google Wallet.
FacebookTwitter
SubscribeGoogleWhatsappPinterestDiggRedditStumbleuponVkWeiboPocketTumblrMailMeneameOdnoklassniki
Related ItemsAfter SchoolBoyfriendGang KizGaon ChartsGyeonggiIUSeoulT-araTHE K-POPU-KISSZE:A
← Previous Story JYJ’s Yoochun greets Thailand fans for upcoming fanmeeting
Next Story → Shin Se Kyung poses for Vogue and GQ