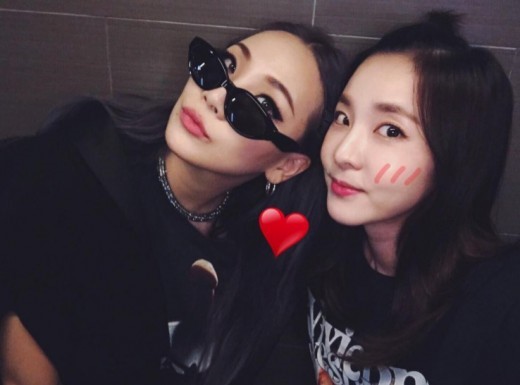 Sandara Park On CL: “I Can Depend On My Dongseng~Thank you~I Love You!!”

Although 2NE1 is no more, the members are still as close as sisters.

2NE1‘s former member Sandara Park recently posted a photo of her and ex-bandmate CL on her Instagram.

Alongside the picture, the idol expressed her surprise and happiness due to CL’s unexpected visit.

She wrote:”Chae Rin said she wanted to visit the set of my movie to cheer for me and she really made a surprise visit. She even came and greeted everyone!! I can depend on my dongseng~ Thank you~ I Love you!!”

CL, Sandara Park, together with Gong Minzy and Park Bom, were the members of the now disbanded 2NE1.

The group was officially dissolved in November 2016 after the members’ contracts with their agency YG Entertainment ended.

Before the official disbandment, the quartet bid farewell to their fans with a final track titled “GOOD BYE”.

As soon as its release, the song debuted at no.1 on Billboard’s World Digital Song Sales chart, edging out other global stars.