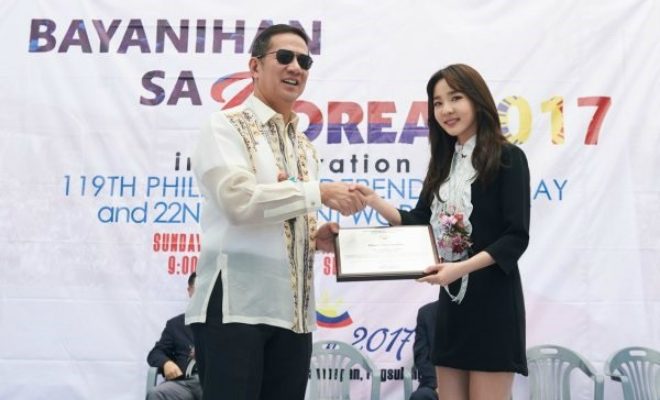 Sandara Park is the perfect choice!

Former 2NE1 member Sandara Park was named as the Korea-Philippines Friendship ambassador, according to YG Entertainment.

Park expressed her gratitude for the appointment and vowed to help in the promotion of the Philippines. “The Philippines is like my second hometown for me. I will promote the country with a sincere heart,” she said.

The singer-turned-actor also attended the 119th Philippine Independence Day and 22nd Migrant Workers Day celebration in Seoul on June 11. Titled as Bayanihan sa Korea 2017 (Filipino community spirit in Korea), Park joined some 1,500 Filipinos in the event, which was hosted by the Embassy of the Republic of the Philippines in South Korea.

The idol also relayed her thanks via her Instagram account. “This is an honor for me. I want to thank everyone who have loved and supported me throughout this journey,” she wrote, ending her post with “maraming salamat (thank you)” and “mahal ko kayo (I love you all)”.

Thank you so much for choosing me as the Friendship Ambassador to the Philippines. This is an honor for me. ?? I want to thank everyone who have loved and supported me throughout this journey. Maraming salamat!!! Mahal ko kayo!!! ???

Popularity and influence in the Philippines

The former 2NE1 member spent a part of her growing up years in the Philippines together with her family. She also began her career as an actress and singer in the Philippines in 2004 through a reality-based talent search Star Circle Quest, where she finished second.

She then build a successful acting and singing career in the archipelago. In 2007, Park permanently left the local show business and returned to South Korea. Despite her absence in local television for many years, the singer-actress has maintained her popularity in the Philippines, where she is dubbed as the “Pambansang Krung-Krung ng Pilipinas”. “Krung-krung” means crazy or has a four-dimensional personality.

Park became one of the judges for local program Pinoy Boyband Superstar in 2016, and also participated in promotional activities for a clothing brand. This year, she promoted her movie One Step in the country.

Park has been active in the promotion of Philippine tourism through her stint in Battle Trip, and continuously supported the country especially in times of calamities. Park, together with her brother Thunder, called people for support in aiding then typhoon-struck Philippines.

We need your support! If you have enjoyed our work, consider to support us with a one-time or recurring donation from as low as US$5 to keep our site going! Donate securely below via Stripe, Paypal, Apple Pay or Google Wallet.
225
SHARES
FacebookTwitter
SubscribeGoogleWhatsappPinterestDiggRedditStumbleuponVkWeiboPocketTumblrMailMeneameOdnoklassniki
Related Items2NE1Korea-Philippines FriendshipSandara Park
← Previous Story G-Dragon To Visit North America For His World Tour In July
Next Story → BLACKPINK To Have A Mythological Comeback This Summer?