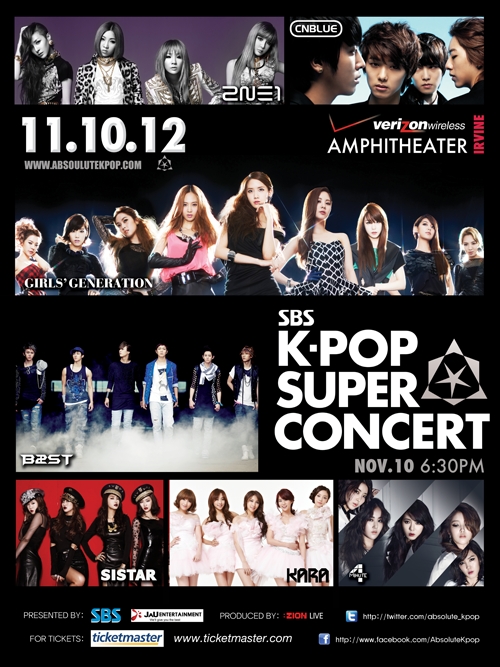 SBS K-POP Super Concert is back in November

The SBS K-POP Super Concert is back on Saturday, November 10, 2012 at the Verizon Wireless Amphitheatre in Irvine, CA!

With a new date and location, the postponed concert has made good on its word to return and host the biggest K-pop concert in America. For many K-pop fans, this will be a very rare chance to see seven of the most popular, chart topping K-pop idol groups from South Korea: Girls Generation, 2NE1, CN Blue, SISTAR, BEAST, 4MINUTE, and KARA.

Tickets go on sale from Friday, October 5, 2012. As promised, previous ticket-buyers will receive first-priority seating and be given the opportunity to purchase tickets before they are released to the general public. Individual codes for priority access to ticket sales will be emailed by Thursday, October 4, 2012, 10:00 PM PST. For those who did not previously purchase tickets, tickets for this concert will go live on TicketMaster.com on Friday, October 5, 2012, 11:59 PM PST.

Despite a few set-backs, fans’ high anticipation of SBS’s K-pop Super Concert is apparent as the Facebook page has continued to garner nearly 19,000 followers, all eagerly waiting for the return of the K-pop event of the year. Fans can continue to find more up-to-date concert-related news and information through Facebook  or the website.

Featuring all top-rated Korean pop stars who are currently leading the Korean Wave (The Korean Wave refers to the significant increase in the popularity of South Korean entertainment and culture), the SBS K-pop Super Concert will not only satisfy existing K-pop fans who have thirsted for a mega K-pop concert of this caliber and size in the US, but also assist in building more awareness of the K-pop sensation that is sweeping the world of its feet.

The event is being hosted by South Korean television station, SBS Broadcasting System Inc., JAU Entertainment Inc., and Zion Live Inc. Broadcasted on SBS, the SBS K-pop Super Concert will be documented as a historical event that displays all K-Pop fans on a global scale gathering together in honor of the emerging Korean Wave.
Source: Absolute Kpop PR