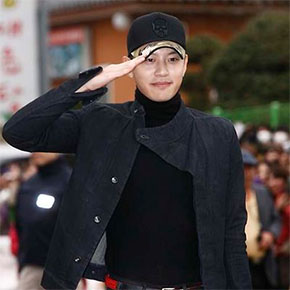 Arguably, YG‘s most popular soloist, Se7en, officially admitted himself to the Uijoungbu 306 Reserve Battalion on March 19. His Korean, Japanese and Taiwanese fans, along with reporters, all came to see him one last time and to bid him a fond farewell.

Se7en told the people gathered that,“I’ve entered at an older age, but I will try my best.” Before leaving for the military, Se7en also revealed the music video for his track Thank U, which he had sung for the first time on March 9 during his special anniversary concert.

Se7en will be active for 21 months and is incidentally the first YG artist to enlist. As he put on a smile, he saluted his fans. Will you too smile and support him while he is performing his duties?

We need your support! If you have enjoyed our work, consider to support us with a one-time or recurring donation from as low as US$5 to keep our site going! Donate securely below via Stripe, Paypal, Apple Pay or Google Wallet.
FacebookTwitter
SubscribeGoogleWhatsappPinterestDiggRedditStumbleuponVkWeiboPocketTumblrMailMeneameOdnoklassniki
Related Itemsenlismentmilitary servicemvSe7enThank YouUijoungbu 306 Reserve BattalionYG Entertainment
← Previous Story D-Unit takes pictures with BIGBANG, PSY, 2NE1, Nicole and BoA
Next Story → Lunafly greets Indonesian and Malaysian fans