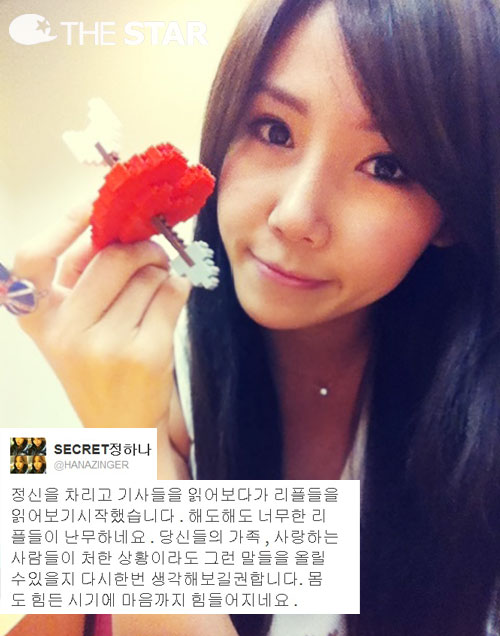 Secret’s Zinger, “my heart and mind hurt very much too”

On December 13th, Secret‘s member Zinger expressed her feelings on her Twitter.

A couple days ago on December 11th, Secret had a car accident that left Zinger with a fractured rib and ended hospitalized.

Zinger says, “Now that I got my thoughts together, I saw the articles and started to read the comments. There were some really negative comments. If it was your family and your loved ones in the situation, could you say the exact same thing, I’m asking you to think about it one more time. My body is aching so much but my heart and mind hurt very much too.”

On December 11th, the vehicle that Secret was in, had an accident as it rolled over the icy roads. Zinger had fractured her rib and also a bruised lung. She will need to stay in the hospital for 4 weeks until further checkup from her doctor. After reading the negative comment, Zinger could only update on her Twitter, expressing her sadness due to the insensitive comments.

Right after, her fans left encouraging comments, “Don’t think too much of those, don’t keep it close to heart”, “Get better soon and return to stage soon!”, “I was so surprised. Get well soon and show us Secret’s Talk That on stage.”

Secret’s newest song Talk That which was released on December 4th, will have its promotion activities suspended for the time being due to the unfortunate car accident.

Do  you think it was necessary or even appropriate for people to talk negatively on Secret’s accident, or even any other unfortunate accident out there?