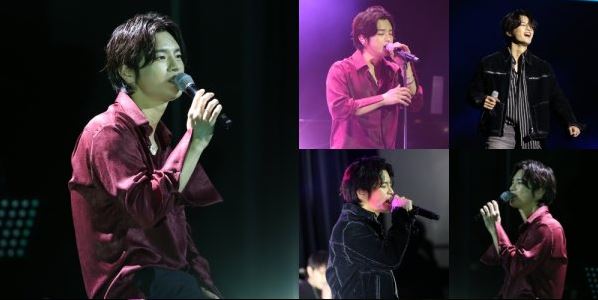 Seo In Guk is grateful for a decade worth of love and support from his fans.

Hence, the talented actor-singer spent an eventful time with fans in Seo In Guk Year-End Concert [S # 33/ TAKE10] at the Donghae Culture and Art Center in Kwangwoon University, Seoul on November 28.

Notably, the concert celebrates the 10th anniversary of Seo In Guk’s debut as a singer. Thus, making it more meaningful as a time for the artist to thank fans for the overwhelming love he has received.

Presenting 23 special songs, Seo In Guk made the almost 3-hour event a memorable occasion in front of over 2500 fans from Korea, Japan and China.

Setting up the night on a high spirit, Seo colored his opening stage with his classic favorites “Broken” and “Saranghae U”. Enchanting the crowd with his flawless vocals, cheers exploded from his adoring fans.

After finishing his first set of songs, Seo In Guk welcomed the fans. He said the celebration of his 10th anniversary makes him want to look back with them on his journey.

Thereafter, the singer belted a ballad medley of “Finding Myself”, “with Laughter or With Tears” and “Flower”. Heating up the raving audience, he also powered exciting beats and groovy rhythms with “BEBE”, “Shake it Up” and “My Baby U”. Exciting the crowd even more, Seo added sultry notes in his performances receiving immense cheers from the audience.

Making the fan meeting even more special, Seo’s co-star in his breakout drama, Reply 1997 appeared. Known as expert in “scene-stealing” Lee Si Eon made a delightful duet with his friend through the drama’s popular OST “All For You”.

In the encore stage, Seo In Guk poured his emotions with a heartfelt rendition of “Mint Chocolate”. Truly doting to his supporters, the actor-singer also surprised fans with T-shirt and chocolate gifts.

Capping off the evening, Seo In Guk conveyed his genuine gratitude to the audience.

He said, “Thank you for spending 10 years together. I hope everyone who remembers 10 years made memories from today.” Hoping that his fans got a pleasant nd eventful time, Seo promised to treat them with more shows in the next 20, 30 and even 40 years.

Seo has last worked on lauded jTBC drama, The Smile Has Left Your Eyes. He is anticipated to appear in the film Pipeline and Hip Daddy.