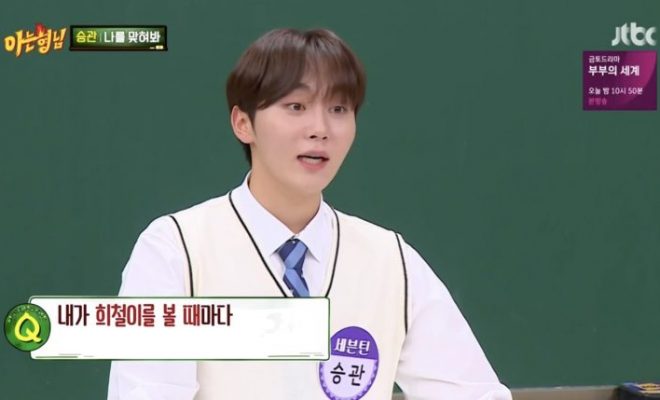 It is a well-known fact among fans of Knowing Brothers that Kim Heechul has an unrivaled talent in recognizing a song by listening only to the first few seconds. However, it was all about to change as Seungkwan took the crown from him.

During his appearance on the show he proved the worth of his nickname “Bookebox”— which is a combination of Boo Seungkwan and jukebox.

On an episode of Knowing Brothers aired on March 28, Seungkwan appeared as a guest on the show along with VIXX’s Ravi, Kim Jun Hyun and Hong Hyun Hee. The show content ranges from witty talks to music quizzes giving a great laugh to viewers through the varied sense of entertainment provided by the cast. 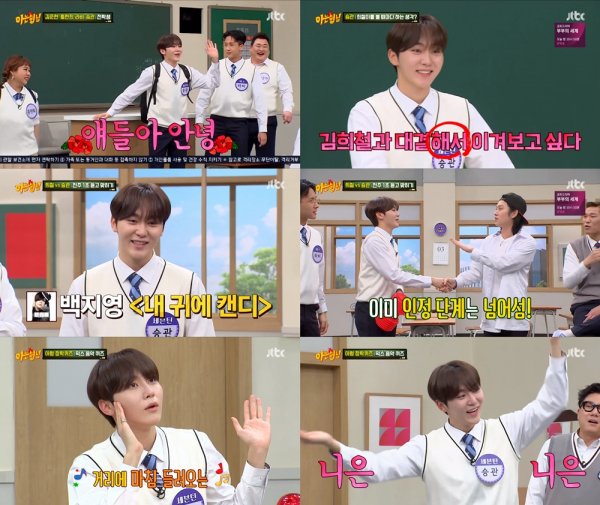 Seungkwan introduced himself as SEVENTEEN’s Seungkwan who dreams of becoming the Lee Soo Geun of the idol world, revealing his ambition of becoming an entertainer who can humor the audience. He also narrated the story of his past encounters with Ravi as well as spoke about his mother’s unusual surname.

Afterward, Seungkwan proceeded to challenge Kim Heechul, the reigning champion of the Listen for 1 second and guess the song game. Even in this tight and fierce battle, Seungkwan performed the point choreography of the songs with serenity.

He even surprised everyone by stating the correct the release information of the song. Finally, he won the game and earn the praise of Kim Heechul. Kim Heechul also said, “I have no choice but to pass my title to you.”

Additionally, in the following Initial Charades section, Seungkwan had a great teamwork with his partner, Hong Hyun Hee. And of course, he was outstanding in the Mix Music Quiz, where he was quick to recognize the music.

Speaking about the show Seungkwan said that he had fun and it was an honor to compete against Heechul.

Meanwhile, SEVENTEEN are scheduled to release their Japanese second single “Fallin’ Flower” on April 1. Earlier they had released the music video as a gift to fans on March 24.