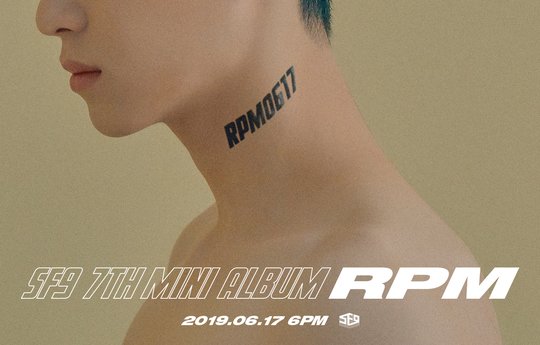 SF9 Revs Up For Captivating Comeback With Edgy Teaser Photo

SF9 is ready to make summer hotter with their temperature-raising comeback!

Get ready to be enchanted by their charms again, FANTASY! SF9 will take on a more daring concept for their next comeback as reflected by their title poster reveal.

The boy group teased fans on June 4 with an enticing poster to announce details about their upcoming seventh mini-album! Titled RPM, the album is slated for release on June 17 at 6 PM KST.

Thanks to their title poster’s mysteriously daring vibes, the group has brought higher expectations for their new, more matured concept to be displayed on their comeback. Additionally, the album’s title RPM means “Revolutions Per Minute” which already poses as a hint for another heart-racing release from the group.

RPM will mark the group’s return to the music scene four months after they released their album NARCISSUS in February. They last captivated fans with NARCISSUS‘ title track “Enough”, where they showed off more of their manly charms on a darker mood.

This year, Youngbin, Inseong, Jaeyoon, Dawon, Zuho, Rowoon, Taeyang, Hwiyoung and Chani embarked on their 2019 SF9 Live Tour [UNLIMITED]. Just last April and May, the nine boys visited their numerous fans in a total of ten cities for their tour’s Europe and U.S legs.

Besides “Enough”, the group showcased their plethora of talents in hit songs like “Mama Mia”, “O Sole Mio”, “Now or Never”, and more. Their unique style and appeal, along with their willingness to experiment in different genres for their various releases, have made them gain popularity all around the world.

Hellokpop, as an independent Korean entertainment news website (without influence from any agency or corporation), we need your support! If you have enjoyed our work, consider to support us with a one-time or recurring donation from as low as US$5 to keep our site going! Donate securely below via Stripe, Paypal, Apple Pay or Google Wallet.
FacebookTwitter
SubscribeGoogleWhatsappPinterestDiggRedditStumbleuponVkWeiboPocketTumblrMailMeneameOdnoklassniki
Related ItemsSF9sf9 2019 comebacksf9 rpm
← Previous Story WJSN Shares Bubbly Music Teasers For Comeback Album “For The Summer”
Next Story → Bigflo’s Euijin To Show More Of His Charms In First Solo Fan Meeting In Japan