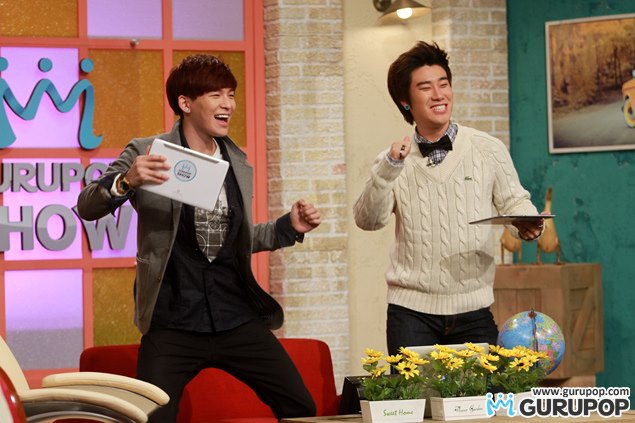 Confused? Wondering what in the world GURUPOP is, or what it means? Well, ponder no more, because hellokpop.com has the skinny for you.

In the world of well-known Korean variety programs such as Strong Heart and Star King, there has been a surge in smaller, lesser-known, web-based shows targeting K-pop fans. While these shows do feature K-pop artists, most of them still follow the format of being filmed in Korea and are filmed completely in Korean.  GURUPOP, on the other hand, has completely broken the mold and already has scores of K-pop fans worldwide singing its praises.

Why?  What’s the big deal? Well, for most international fans, the greatest aspect of the show is that it’s filmed in English. The show slogan, “The place to meet and interact with your K-pop stars, GURUPOP!” says it all. Hosted by Daniel, from Dalmatian, and hip-hop rapper, San-e, the show highlights artists from the K-pop industry and introduces them to their fans in a completely live environment. Daniel and San-e MC the show with a synergistic enthusiasm that keeps fans well informed and in stitches. Their on-and off-camera charisma battles fiercely with each highlighted K-pop group for ultimate popularity. 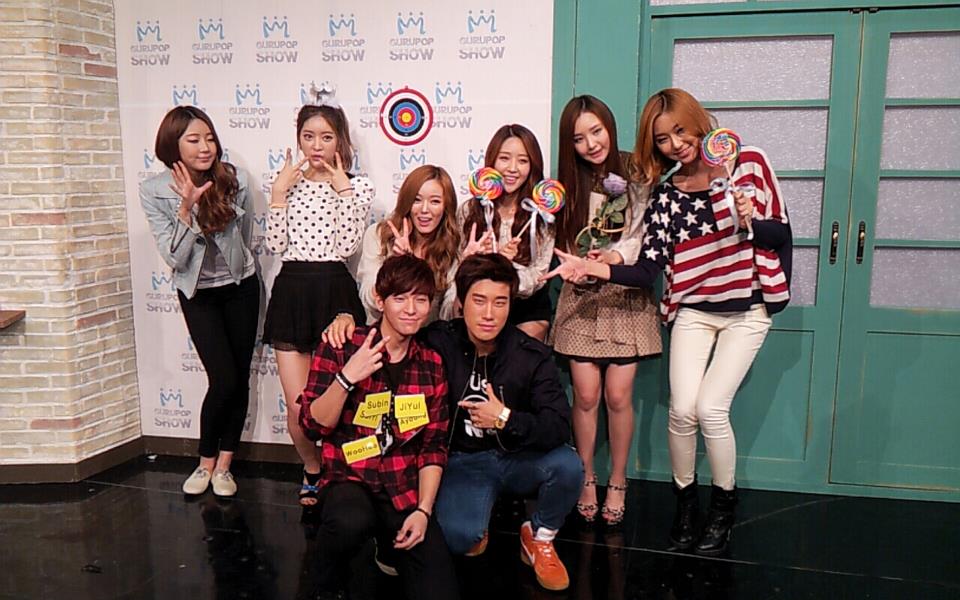 Season one has seen appearances from K-pop groups like Wonder Girls, Boyfriend, MBLAQ,  ZE:A, Girls Day, DalShabet, and most recently, Ukiss, Exid and BtoB. Sounds exciting, doesn’t it? The artists’ appearances on the show itself are only a small portion of the excitement surrounding GURUPOP. The genius of this show is two fold. Broadcast a live show with popular artists in English–with interactive segments for the live viewers–and incorporate an interactive website with contests, fan clubs and collecting. 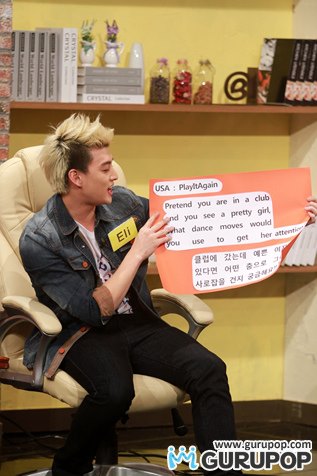 Want some more details?  Don’t worry!  We got you! The fun doesn’t just start when an episode airs. A week or so before a show’s air date, GURUPOP makes a formal announcement of who the next guest artist will be.  From there, the fun really begins. We mention contests right? Well, right off the bat, fans can participate in a contest of “Who is better than Who – the K-pop artist version.”  Admins of GURUPOP post a poll question for fans to answer.  The poll’s outcome determines where each member of the group will sit on the stage during the show on which they will be appearing. The number one spot gets an ever-so comfortable chair (as seen above) to relax in, while the last place spot is banished to sitting on a simple pillow on the floor.  Other members are assigned seats in ever-increasingly uncomfortable places.  Questions like, “Who was the first Ukiss member to have their first Kiss?,” and “Which member would be the best cook?,” are just some of the comical and fun questions that have been asked.

GURUPOP also holds a “Q & A” and “Wishes” event for each show, where fans can submit questions and requests for the artist to answer live, on-the-air. If your question/wish is chosen, then the artist will answer it live, or perform the request live (such as a dance or showing off their aegyo).  Then that fan will be sent an autographed Polaroid taken during the show by one of the artists. 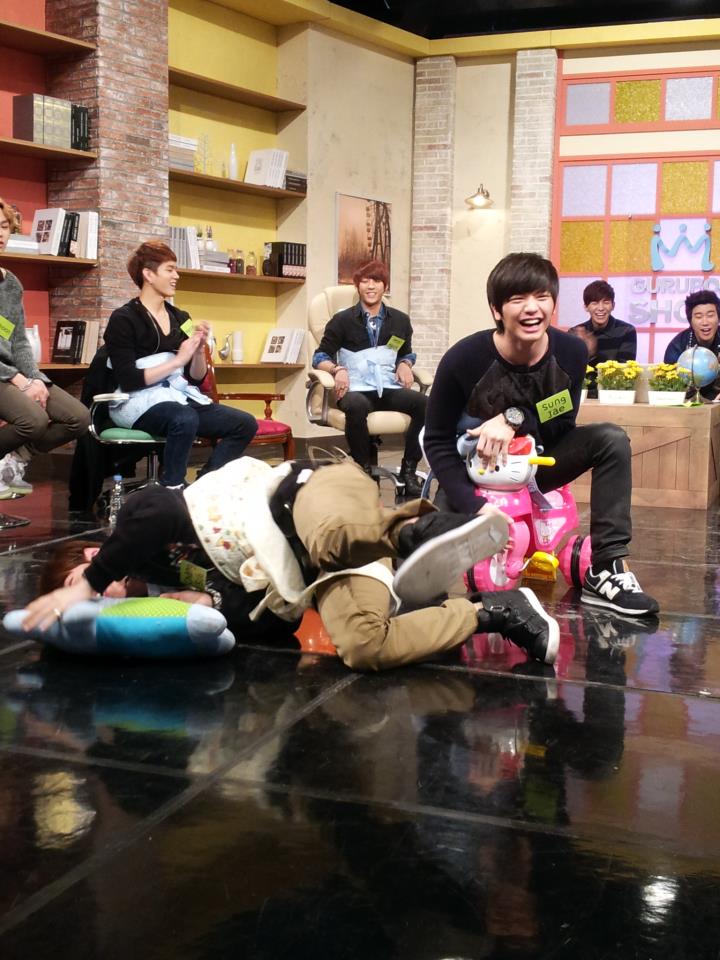 During the show’s introduction segment, Daniel and San-e talk about what has been going on lately in the world of K-pop and highlight recent SMS posts from K-pop artists, such as photos and tweets posted on Twitter. During the next segment, the artists arrive, are introduced and placed according to their respective seats according to that week’s poll. Group members take turns answering the fans’ questions and wishes while giving more personal insights into their real lives, career and interpersonal relationships within the groups.

Artists then participate in contests. Separated into teams based on their seating, the groups fight for dominance with games such as archery, balloon popping while riding toy cars, dance contests, and even cooking contests–all for the chance to swap seats with someone who is sitting in a more comfortable spot. This part of the show is definitely the fans’ favorite. Being able to see their favorite group act silly and play like kids is a welcome change from the normal prim and proper images of most variety shows. The last segment is “Teach Me Korean,” where they pick a word or phrase from the Korean language and run scenarios with the artists to show you not only how the word or phrase is pronounced, but also how it is used in daily Korean life. 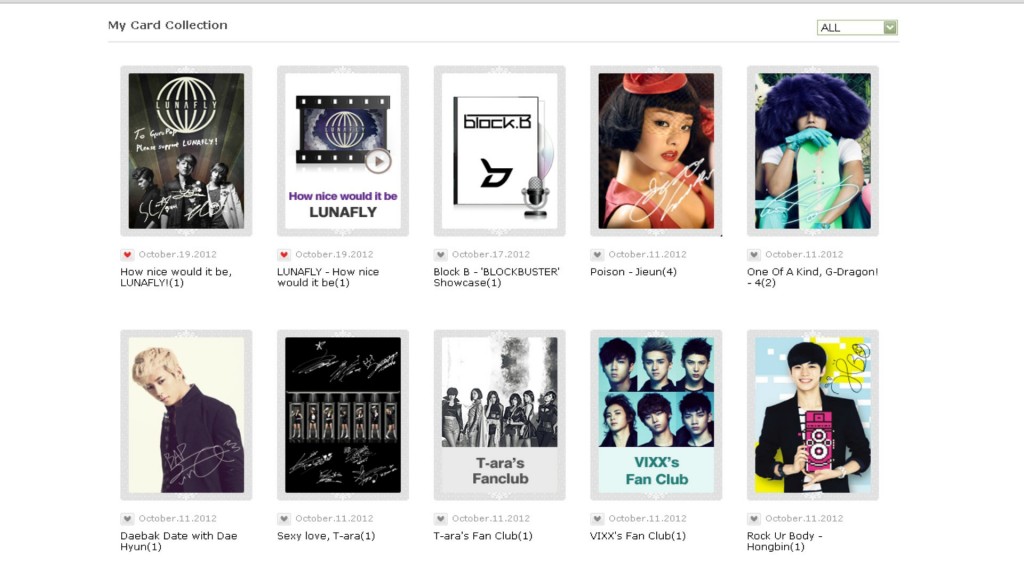 Besides the impressive and entertaining aspects of the live show, GURUPOP has incorporated a fun and interactive website into the mix. GURUPOP’s website not only offers fan clubs for every K-pop artist imaginable, but also holds special events and contests for fans. The contests deemed “STAR QUESTS” range from simple question submissions and missions to video contests and music video reviews. Winners of the STAR QUESTS win autographed CDs from the artists and/or special cards.

Did someone say cards? Yes! The other fun and exciting aspect of the show’s interactive website is special card collecting feature. For all of you out there who have suffered the addiction of collecting Pokemon or Yu-Gi-Oh cards over the years, GURUPOP is now feeding your addiction with K-pop artist cards.  From general artist cards, to specialty and rare autographed cards, the website offers a wide variety of cards for every artist and incorporates a card swapping/gifting ability that allows fans to collect cards they are missing from other GURUPOP fans to complete their collections. The website also includes artist-specific forums where fans can interact with one another, share news of their favorite stars and participate in general fan-girling/boying.

Worried that the show is on at an indecent hour where you live? That’s not a problem either. After the show airs, GURUPOP posts the latest show on their official YouTube channel for the fans that may have missed it. While watching it on YouTube can be a substitute when you just can’t make the live airing, the fun of watching and participating with the show live can’t be matched.

Curious about the show? Check out the following highlight reels from the show featuring EXID’s aegyo and Dalmatian playing a balloon popping game.

Since its first air date in early August, GURUPOP has garnered a large fan-base and dedicated viewership from all across the world that has transformed literally a lump of coal into an absolute gem in the K-pop variety show world.

For more information on GURUPOP and to check out all the addictive fun, please visit the show’s official Facebook page, and YouTube Channel. Be sure to follow them on Twitter and explore their website too.  Please also don’t forget to tune in to the next show for a K-pop variety show experience like no other.

You won’t be disappointed. Peace.