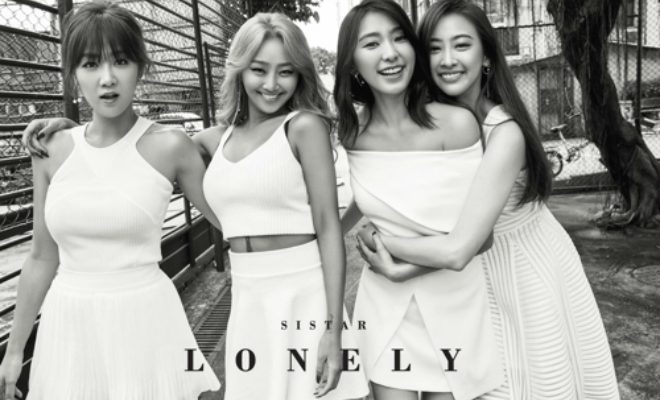 For The Last Time: SISTAR Slays Music Charts With Final Song Before Disbandment

It’s bittersweet for SISTAR and fans …

The R&B acoustic track produced by Black Eyed Pilseung has scored the number one spot on seven music streaming sites, including Melon, Olleh Music, Naver Music and Bugs Music in less than 24 hours since its release on May 31.

Lonely will also mark the quartet’s final song before ending their 7-year promotions as a group. Starship Entertainment has announced the disbandment of SISTAR, which came as a surprise to many.

Hyolyn, Soyou, Bora and Dasom debuted in 2010 with Push Push and have gained popularity steadily. They are also often dubbed as “summer queens” for their hit summer tracks such as So Cool, Loving U, Give It To Me, Touch My Body, Shake It and I Like That.

With their disbandment, Hyolyn and Soyou are expected to pursue solo careers, while Dasom and Bora will venture into acting.

105
SHARES
FacebookTwitter
SubscribeGoogleWhatsappPinterestDiggRedditStumbleuponVkWeiboPocketTumblrMailMeneameOdnoklassniki
Related ItemsBoraDasomHyolynLONELYSISTARSoyou
← Previous Story ‘The Third Guy From The Left’ BTS’s Jin: “I Guess I‘m Worldwide Handsome”
Next Story → BIGBANG’s T.O.P Under Investigation Over Marijuana Use + Fans Promise To Stand By Him