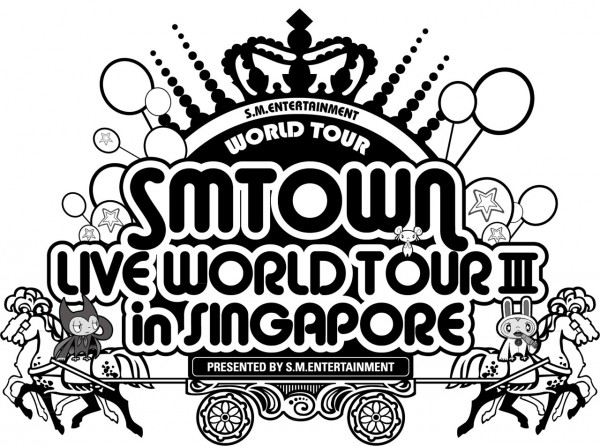 Combining a star-studded line up of K-pop acts and a massive S$5 million production value; SMTOWN Live World Tour III in Singapore is set to be the must-watch concert of the year. Concert-goers will be spoilt for choice when a powerful line-up of artistes from SM Entertainment such as Super Junior, Girls’ Generation and BoA arrive on our shores for what promises to be a spectacular feast for the senses.

SMTOWN Live World Tour III in Singapore will bring fans of various K-pop groups together for the first time, in a multi-act mega concert that has been touted as the mother of all K-pop concerts. With a slew of solid acts of varied music styles and genres, SMTOWN Live World Tour III in Singapore will present the perfect opportunity for K-pop fans as well as the K-pop uninitiated to fully experience the K-pop phenomena that has rocked the world with its widespread popularity and rapidly growing international influence.

“The growing popularity of K-pop music and culture across the world or more popularly known as “Hallyu” has brought many diverse communities together and Samsung is happy to be one of the key drivers behind this celebration of cultural diversity. Samsung is proud to present the widely popular and iconic SMTOWN Live Tour III in Singapore, to delight fans and most importantly, our loyal customers who will get to receive limited edition memorabilia and stand more chances to win concert tickets,” says Ms Irene Ng, Vice President, Marketing, Samsung Asia Pte Ltd.

The biggest concert ever to be staged in Singapore, the Singapore stop for SMTOWN Live World Tour III will also be the first time that the concert is performed on a floating stage, and a special programme will be put together to incorporate the unique staging of the show.

SMTOWN, the world tour with performances by various artistes from one of South Korea’s biggest entertainment agencies, SM Entertainment, has become a massively popular concert tour that has been staged in prestigious international arenas such as Madison Square Garden, New York to 15,000 in the audience and Zenith de Paris in France to 14,000 in the audience. To date, over half a million people across the globe have attended an SMTOWN concert since the first tour started in 2008.

SMTOWN Live World Tour III has been performed in 2012 at Anaheim, United States; Hsinchu, Taiwan; Tokyo, Japan and Seoul, Korea. SMTOWN Live Tour III in Singapore will be the concert tour’s sixth stop and is expected to attract audiences from Singapore and around the region. 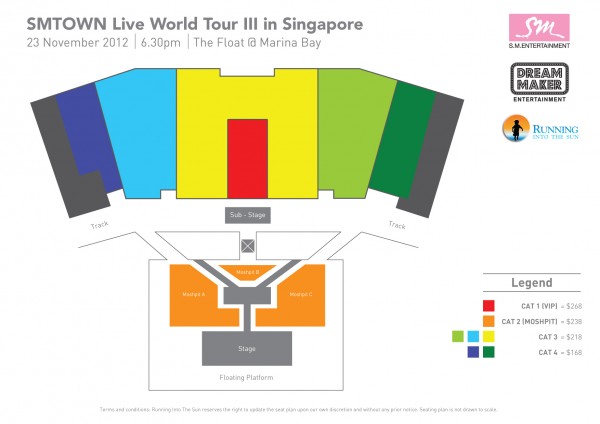 tickets will enjoy a 5% discount.

– Malaysian fans will be able to purchase their tickets from Ticketcharge

1. Will there be a ticket launch event?

A: No, there will not be a ticket launch event for SM Town Live World Tour III in Singapore.

A: Unfortunately, you cannot choose your seats. You can only choose your preferred colour zone.

There will be seat numbers printed on your ticket (it is not free seating). When you purchase tickets,

SISTIC’s system will choose the best available seating at the point of transaction.

3. How many tickets can I purchase?

A: Each person is entitled to a maximum of 8 tickets only per transaction.

A: For safety reasons, yes, there is an age limit.

Children below the age of 12 are not allowed into the Moshpit.

Children below the age of 7 are not allowed in for the concert.

5. Is there any way possible that I am allowed to access the backstage to see my favourite Korean

A: Backstage access is not allowed at all times.

6. What are the modes of payment?

A: Customers can make payment via cash, NETS, credit and debit cards at Sistic counters; and credit

and debit cards via online and phone bookings.

For online and hotline bookings, only credit cards and debit cards issued in Singapore are allowed.

The debit card must be able to do online transactions. If you are not sure if your debit card can be

used for online transactions, please check with your bank.

7. How can overseas fans purchase tickets?

A: Overseas fans can purchase tickets online through the SISTIC website (www.sistic.com.sg) from

Ticketcharge at www.ticketcharge.com.my. Other overseas fans can purchase tickets at overseas

8. Are there any limits to what kind of tickets I can purchase?

A: No, you can purchase tickets from any category. Age restrictions apply (please see point 4).

9. I bought the Light Blue Zone tickets, can I move to the Yellow Zone?

A: No, you are to strictly remain at your respective ticket color zone at all times.

10. What happens when it rains?

A: This is a rain or shine event.

11. Will there be a second night for the concert?

A: No, this is strictly a one night only concert.

12. Why are the blocks at the side of the stage in grey?

A: Those seats are Partially-Restricted View seats and we will not release these seats for sale till the

physical set up of the stage. This is to ensure that all fans who have bought tickets to this concert

will have a good view of their favourite artistes.

About Running Into The Sun

Running Into The Sun is a concert promoter best characterized by its fresh, inventive and trailblazing modus operandi. While barely at its three-year mark, the company was named “Top of the Pops” in The Straits Times 2011 Power List, ranked first among the top ten entertainment companies in Singapore for “scoring more high profile acts and media buzz than other older companies”.

OCBC Bank is the longest established Singapore bank, formed in 1932 from the merger of three local banks, the oldest of which was founded in 1912. It is now the second largest financial services group in Southeast Asia by assets and one of the world’s most highly-rated banks, with an Aa1 rating from Moody’s. It is ranked by Bloomberg Markets as the world’s strongest bank in 2011 and 2012.

OCBC Bank’s key markets are Singapore, Malaysia, Indonesia and Greater China. It has a network of over 500 branches and representative offices in 15 countries and territories, including about 400 branches and offices in Indonesia that are operated by its subsidiary, Bank OCBC NISP. OCBC Bank’s insurance subsidiary, Great Eastern Holdings, is the largest insurance group in Singapore and Malaysia by assets. Its asset management subsidiary, Lion Global Investors, is one of the largest private sector asset management companies in Southeast Asia. Private banking services are provided by subsidiary Bank of Singapore, which continued to gain industry recognition in 2011 including being voted the “Outstanding Private Bank in Asia Pacific” by Private Banker International.

Hellokpop, as an independent Korean entertainment news website (without influence from any agency or corporation), we need your support! If you have enjoyed our work, consider to support us with a one-time or recurring donation from as low as US$5 to keep our site going! Donate securely below via Stripe, Paypal, Apple Pay or Google Wallet.
FacebookTwitter
SubscribeGoogleWhatsappPinterestDiggRedditStumbleuponVkWeiboPocketTumblrMailMeneameOdnoklassniki
Related ItemsBoAgirls generationHallyuK-popKpopRITSRunning Into The SunSamsungSHINeeSingaporeSM EntertainmentSMTOWN Live World Tour IIISuper JuniorTVXQ
← Previous Story Shiseido releases Choi Ji Woo advertisements
Next Story → IU and Yoo Seung Ho for ‘G by Guess’