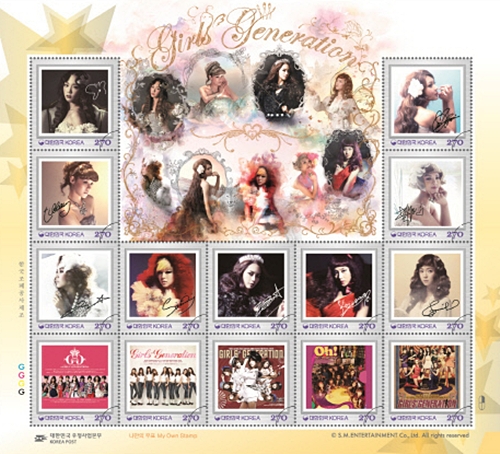 In honor of SNSD‘s fifth anniversary, Korea Post will release Girls’ Generation My Own Stamps featuring each individual member and five album jacket stamps this August.

The photos of the members used on the stamp will be from SNSD’s third album, The Boys. The stamps will also include each member’s autograph. A total of fourteen stamps will be produced.

Seoul Central Post Office and fifty post offices throughout Korea will sell the exclusive stamps for 20,000 won (approximately $18 USD). Girls’ Generation My Own Stamps will be displayed at Korea Philatelic Exhibition at Coex from August 9 to 13.

Kim Taewan from Korea Post added, “The Girls’ Generation stamps will contribute greatly to the stamp culture and help the Hallyu movement grow.”

SNSD will be the first celebrities to release postage stamps in Korea.

Hellokpop, as an independent Korean entertainment news website (without influence from any agency or corporation), we need your support! If you have enjoyed our work, consider to support us with a one-time or recurring donation from as low as US$5 to keep our site going! Donate securely below via Stripe, Paypal, Apple Pay or Google Wallet.
20
SHARES
FacebookTwitter
SubscribeGoogleWhatsappPinterestDiggRedditStumbleuponVkWeiboPocketTumblrMailMeneameOdnoklassniki
Related ItemsGirls' Generation My Own StampsKorea Philatelic ExhibitionKorea PostSeoul Central Post OfficeSNSDThe Boys
← Previous Story Jang Geun Suk to attend Summer Sonic 2012
Next Story → T-ara reveal tracklist + jacket cover for ‘Day By Day’