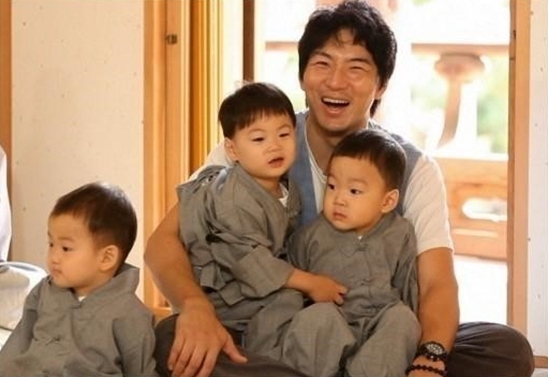 By Larissa | May 8, 2015
119
SHARES
FacebookTwitter
SubscribeGoogleWhatsappPinterestDiggRedditStumbleuponVkWeiboPocketTumblrMailMeneameOdnoklassniki

Actor Song Il Gook and his triplets; Daehan, Minkook, and Manse, are lending a helping hand to the child victims of the recent devastating earthquake in Nepal, as well as the sick children in Korea, by making a generous donation of 100 million Won from the profits of the Song Triplets′ calendars to support those children in need.

On May 4, CEO Lee Je Hoon of Child Fund Korea released the news regarding the father and sons’ kindness, saying:

We want to express our gratitude for showing love and interest and not fogetting about the children who are alienated ahead of Children′s Day. We will carefully use the donation to support the children in Nepal as well as sick children in Korea.

Known for actively participating in voluntary works, such as donating a water well to Burkina Faso while filming the KBS drama Hope Road in 2012, as well as contributing the profits generated from the Song Triplets′ emoticons, Song Il Gook opened up about his good deed to the community this time, sharing:

As I raise my own kids, my heart goes out first to children who are sick. I decided to donate to the children who are suffering due to the Nepal earthquake and the sick children in Korea who can′t run around and play on Children′s Day.

The Song Triplets′ calendars, which were originally created by the actor as presents for his family and friends, have received much love from viewers after they saw the calendar creation process on KBS’ The Return of Superman. With numerous requests from fans for the calendars to be put on sale, Song Il Gook agreed to begin selling them in December last year, with all the proceeds donated to charity.