Song Ji Hyo: “It took me a year to be able to speak comfortably to Running Man’s Tiger, Kim Jong Kook” 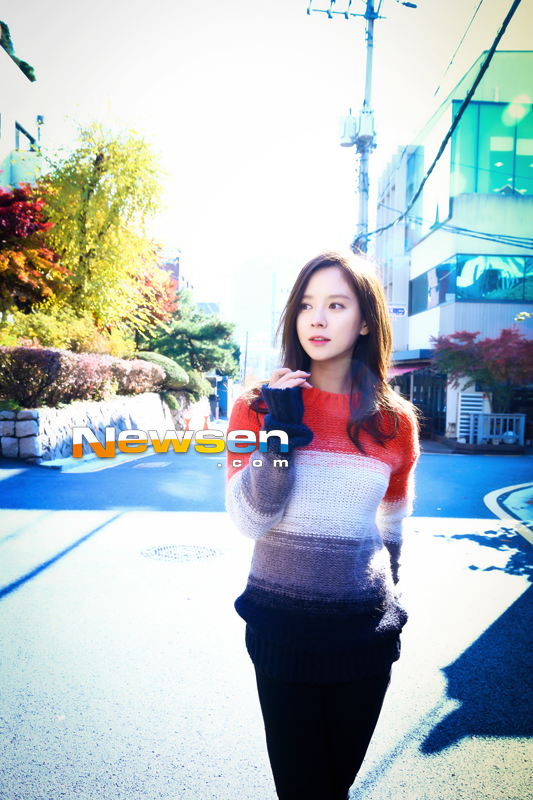 Running Man‘s ‘Ace’ Song Ji Hyo laid bare her thoughts about her feelings when she first began filming for Running Man in a recent interview with Newsen, revealing that she is one who has a tendency of going along with her first impressions and feelings, and that she is ‘very reserved in front of guys’.

Known to the audience of the SBS variety programme,‘Good Sunday-Running Man’, as ‘Miss Mong (Blank/Vacant) and ‘Ace’, Song Ji Hyo’s unconventional charms have gained her a huge following.  Her exploding popularity among elementary schoolchildren has also gained her a new alias, which can be loosely translated from Korean as ‘Chief of Elementary Schoolchildren’ (‘초통령’).

If Song Ji Hyo had not chosen to do ‘Running Man’, it would have been an unfortunate accident, as the ‘Ace’ has proven that she is the right woman in the right place right now. Assenting to this hesitatingly, Song Ji Hyo gives a furtive smile while airing her honest thoughts on the compliment being paid to her as possible only ‘because of the viewers’ support’ for ‘Running Man’, as [she] still ‘bristles at the recollection of her performance during the first shooting’ for the programme.

“I made my debut with Wishing Stairs, but after that production, I strangely beginning to appear in productions that had huge male casts. I have seen and heard many comments like ‘I think Song Ji Hyo is really feminine’ and ‘Isn’t Song Ji Hyo a vixen?’ (laughs) In the initial phase of ‘Running Man’, as the only rose among the thorns, I thought I received a warm reception. Presently? As you have seen, now..well..”(laughs again).

Every time the ‘Running Man’ members call out Song Ji Hyo’s name, they never fail to remind her that she is a female, and an actress. Each time the focus returns back to these facts, the overwhelming pressure that arises have caused Song Ji Hyo to worry and to reconsider (her actions). “If I like it, it must be alright (to act in a certain way). I am funny, aren’t I?” says Song Ji Hyo, who appears to be judging for herself how she should present herself in the difficult world of variety in order to keep her reputation as the ‘Ace’.

“I think the males and females have(natural) tendencies that make us different. With (Kim) Jong Kook oppa, it is indeed a fact that it took us a year before we could let go of speech formalities and speak comfortably to one another. Even the title ‘oppa’ itself was [a] difficult [appellation for me to use]. It was the same with HaHa and Gary oppa as well. Although that [title] is used during filming, from the beginning, titles like ‘hyung hyung’ and ‘senior’ were more regularly used (by me). After having filmed together for one year, somehow it seems like we have become one family. [During filming] we use harsh words to attack each other, saying things like ‘really? Okay, I get it’ and then letting things pass coolly. I think that made [Running Man] become much more interesting”.

Although Song Ji Hyo regards variety shows as ‘works (of art)’ similar to dramas and movies, she reveals that she did feel burdened when repeatedly she was posed this question: “How did an actress [like you] end up doing a variety programme?” Song Ji Hyo offers her explanation on why she thinks they are not that different after all:

“It might be just me, but I wish to remove the perceived distinction between a person who acts and a person who does variety shows. Variety can also be considered as a ‘work (of art)’. No, it is a real ‘work (of art)’. Doesn’t it also give the same feeling as a drama which one looks forward to watching every week? (laughs) I know it is different after all but I just hope people would enjoy watching [the show]. I too will work hard in order to show a different image to everyone, because there is no reason to cover up or to fix [what I’ve shown thus far]”.

In related news, ‘Running Man’ has just aired its 121st episode with Lee Seung Gi and Park Shin Hye as guests. The next episode on the 2nd of Dec is a return to the good old times of the 1980/90s, starring guests Goo Hara (KARA), Kim Wan Sun, Park Nam Jung, Kang Su Ji and members of Fire Engine.