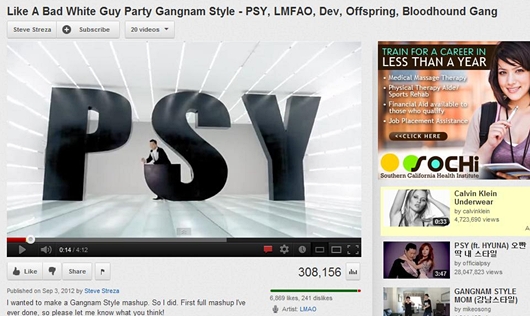 Streza said, “I wanted to make a Gangnam Style mashup. So I did. First full mashup I’ve ever done, so please let me know what you think!” The tracks used for the mash-up include Gangnam Style by Psy, Oppa, You’re My Style by Psy ft. HyunA, Party Rock Anthem by LMFAO, Like a G6 by Far East Movement ft. Dev and The Cataracs, Pretty Fly (For a White Guy) by The Offspring, and Bad Touch by The Bloodhound Gang. Streza incorporated the titles of each song into one title to create the title Like A Bad White Guy Party Gangnam Style.