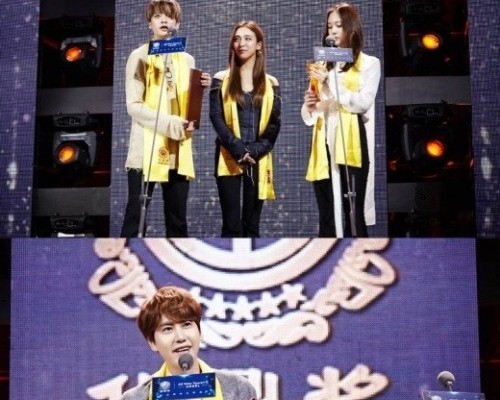 Under the promotion of the State Council of the People’s Republic of China, the Huading Awards have been held every year since 2007. The award show focuses on artists’ achievements in different areas, including music, film and drama.

Kyuhuyun performed his popular song At Gwanghwamun, and afterwards expressed his gratitude to his fans and to the Super Junior members, by saying, “I was able to receive the award because all my fans have supported me a lot. I would like to say ‘thank you’ and ‘I love you’ to fans and (Super Junior’s) members as well.”

Meanwhile, the three members of F(x) who attended, Amber, Luna, Krystal, captivated fans with their hit track 4 walls. The girls said that they were honoured to receive the award and wanted to share the happiness with Victoria, who unfortunately could not take part in the ceremony.