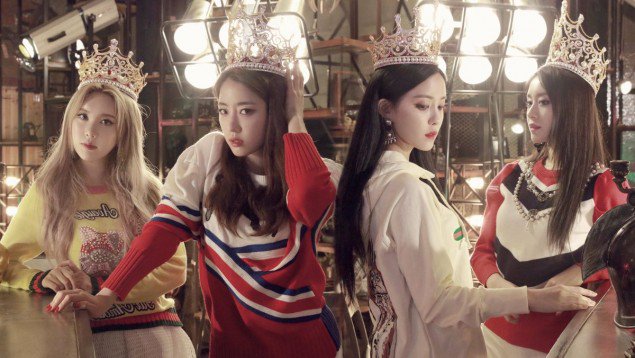 It is an unforgettable moment for T-ara.

On the June 2o episode of SBS MTV’s The Show, T-ara edged out FTISLAND and ASTRO to take the first spot on the music program, with its latest song, titled “What’s My Name”.

The hard-earned trophy marked the girl group’s first achievement on a music program after more than five years since its last win with “Lovely Dovey” in February 2012.

After the MCs announced the winner, the members could not hide their surprise and emotions. They burst into tears on the stage and were even not able to make an acceptance speech. The band also received warm congratulations and support from fans and fellow artists.

As soon as the TV show was completed, member Eunjung uploaded a video, featuring The Show‘s final result, on her Instagram.

Besides, the singer expressed her happiness for the group’s first win after a long time in a photo, with the moment when the members were celebrating the victory with their fans. She also showed her gratitude to their fans, who have stood by T-ara until now.

Hellokpop, as an independent Korean entertainment news website (without influence from any agency or corporation), we need your support! If you have enjoyed our work, consider to support us with a one-time or recurring donation from as low as US$5 to keep our site going! Donate securely below via Stripe, Paypal, Apple Pay or Google Wallet.
132
SHARES
FacebookTwitter
SubscribeGoogleWhatsappPinterestDiggRedditStumbleuponVkWeiboPocketTumblrMailMeneameOdnoklassniki
Related ItemsastroEunjungFTISLANDHyominJiyeonQriT-araWhat's My Name
← Previous Story Tickets For Jang Hyun Seung’s First Solo Fan Meeting Sold Out In 60 Seconds
Next Story → Produce 101’s Kim Samuel Releases Solo Debut Teaser, Declaring “I’m Ready”