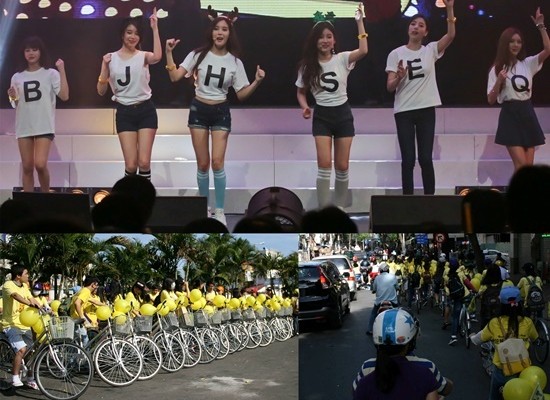 T-ara Touched by Welcome Campaign from 500 Fans in Vietnam

According to a report from Mwave, the Korean girl group T-ara will be in Vietnam for a fan meeting on January 10, which has aroused excitement from Vietnamese fans. They have since launched a welcome campaign to express their enthusiasm and support for T-ara’s visit.

About 500 Vietnamese fans started the campaign by getting their bicycles decorated with flags and balloons, and riding around the city. In addition, the fans have also made a cute flash mob video in which they dance in the background with T-ara’s hit songs.

The idol group is impressed and moved by the fans’ kind efforts, saying: “We’ve been focusing on preparing for the fan meeting in order to return thanks to the Vietnamese fans’ devoted heart”.

On January 10, the fans will have two hours at the meeting to interact and have fun with members of T-ara.

The girl group will be flying off for the event from Korea via Incheon International Airport on January 9.